Arnold Schwarzenegger Is No Longer the Governor of California. Right? - Open Primaries 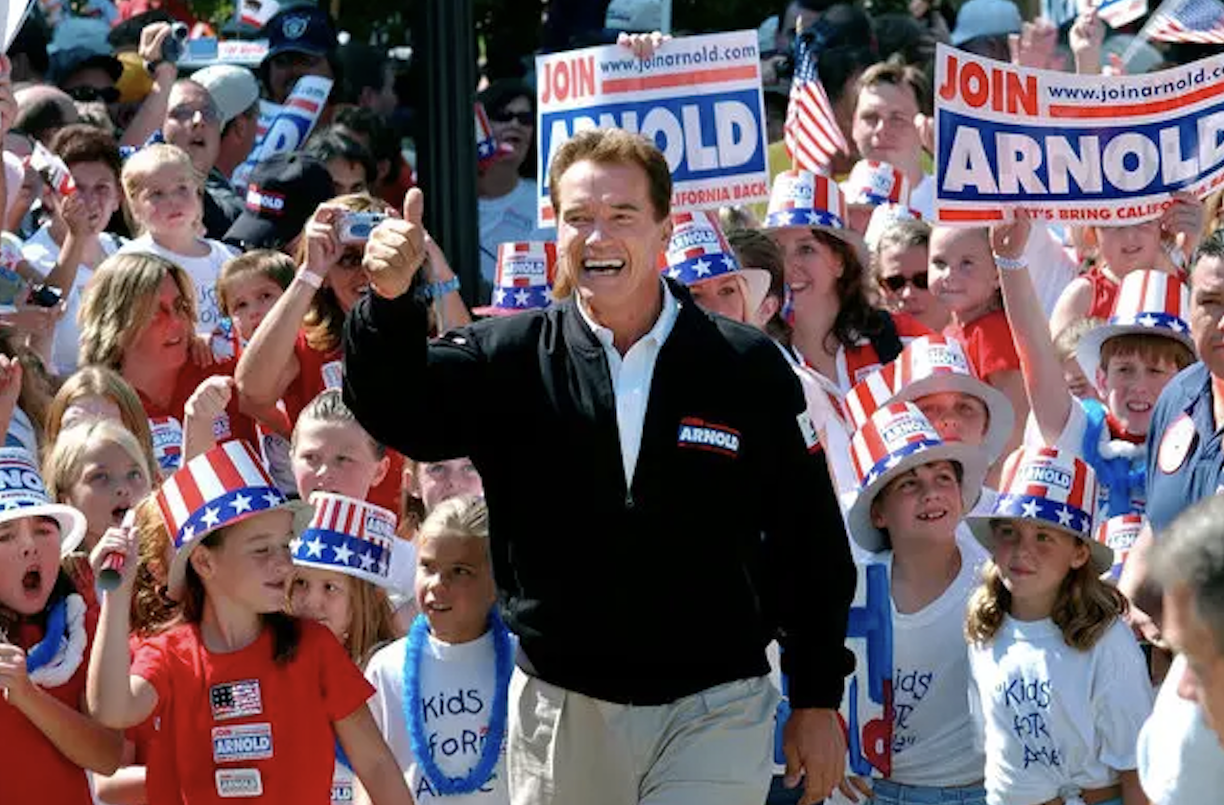 Arnold Schwarzenegger Is No Longer the Governor of California. Right?

Arnold Schwarzenegger Is No Longer the Governor of California. Right?

Amid a pandemic and a recall, Mr. Schwarzenegger has been in demand at his Los Angeles mansion, embracing his unlikely role as California’s “elderly statesman.”

written by Shawn Hubler for the New York Times

LOS ANGELES — Arnold Schwarzenegger settled into a big leather rocker recliner on the back patio of his mansion. His tiny rescue dog, Cherry, scampered at his feet, wearing a butterfly bow.

On his lawn, his miniature donkey, Lulu, was making a break for the hedges. His miniature horse, Whiskey, loitered near a marble bust of Abraham Lincoln. His bar held a dollhouse-size replica of the tank he had driven during a stint in the Austrian Army. A biofuel Hummer was in the driveway. A nine-foot scale model of the Statue of Liberty stood in the foyer. Things were either very large or very small.

Here is where Mr. Schwarzenegger has been holding court in person ever since he went to Dodger Stadium in January to get vaccinated, an event that has been viewed 20 million times on social media. People clamor to get penciled in for a back-patio visit — not just the usual show business people, but also political consultants, talk show hosts and people trying to oust Gov. Gavin Newsom.

It has been 10 years since Mr. Schwarzenegger left Sacramento. An action-movie star who was elected — and re-elected — on a promise to rescue California from Democratic excess, he ended up with a 27 percent approval rating and a personal scandal that ended his marriage.

But California is the land of second — and third and fourth — chances. Mr. Schwarzenegger did not so much repair his image as allow California to recalibrate its view of his contributions. He is a more popular political figure today than when he was elected, a feat for a Republican in a state so blue.

The reasons are as sweeping and small as the reasons California elected him in the first place. Some of it has to do with the pandemic. Some has to do with former President Donald J. Trump. His embrace of bipartisanship has a role, as does the state’s fixation with recalls, not to mention Whiskey and Lulu, who stole the show in a series of homemade public service videos he posted during the pandemic. But much of it is Arnold — the only person in the state’s 170-year history to become governor in a recall — just being Arnold.

Schwarzenegger outside the State Capitol in 2003, when he was running for governor of California.Credit...Steve Yeater/Associated Press
“As a state, we are drawn to personalities who, like him, speak with clarity about what they stand for and who they are — and have a sense of humor about it,” said Mark Baldassare, president of the nonpartisan Public Policy Institute of California. “But seeing him out there this year reminds me that Californians also have an ability to forgive and forget.”

Mr. Schwarzenegger persuaded past and present governors to join him in an ad touting face masks, and drafted his pets, children, staff and girlfriend, a West Los Angeles physical therapist, into helping produce public service announcements on social distancing and handwashing. He raised millions of dollars last year for protective health gear, anteing up $1 million of his own. During the election, he spent $2.5 million in eight states to keep polling places open.

In January, when Mr. Trump’s false claims of voter fraud stirred a mob to storm Congress, Mr. Schwarzenegger posted a speech comparing their actions to the 1938 Kristallnacht sacking of Jewish neighborhoods by European Nazis. The seven-minute video has drawn nearly 78 million views on his social media alone.

There is his Schwarzenegger Institute for State and Global Policy at the University of Southern California. And his new animated children’s series. And his forthcoming spy show on Netflix. And the environmental summit he is hosting this summer in Austria.

None of this, he said, is about ever running again for public office. “Elderly statesman” is how he describes his role now.

“When you leave office, you realize — well, I realized — that I just couldn’t cut it off like that,” he said. “Just because I’m finished with this job that is only kind of a temporary job, does it mean that I have interest only in a temporary way? No! It’s like sports, with the follow-through.”

Mr. Schwarzenegger with Whiskey, left, and Lulu.Credit...Tracy Nguyen for The New York Times

He leaped from the recliner and demonstrated a golf swing and a tennis volley. Cherry hopped to her tiny paws.

In a three-hour interview at his home days before the Newsom recall effort officially qualified for the ballot, Mr. Schwarzenegger was serious and funny, brutally honest and wily. His black zip-up jacket had a governor’s seal patch. It was morning, but he had already exercised and visited with his daughters, who had come by to play tennis. A fire crackled in an outdoor fireplace the size of a real Austrian tank.

As California’s Republican-led recall campaign has advanced toward a probable November ballot, about a half-dozen prospective challengers to Mr. Newsom, including some Democrats, have come to Mr. Schwarzenegger confidentially for counsel, according to his advisers. He sees them in person, or on FaceTime or Zoom — “I want to see people’s faces,” he said, brandishing his iPad.

He offers advice on the political dynamics, but he has not endorsed Mr. Newsom or any rival or taken a position for or against a recall.

In hyperpartisan times, such neutrality is an exception. Though he is somewhat estranged from the Republican Party and has called Mr. Trump “the worst president ever,” he has championed moderation and looking beyond party. The Democrat he defeated to become governor, Mr. Davis, he now considers a friend.

Mr. Schwarzenegger met with Gray Davis in 2003 after being elected to replace him in a recall election.Credit...Rich Pedroncelli/Getty Images

“He speaks for a certain kind of California Republican,” D.J. Waldie, a Southern California author and cultural historian, said. “It may be a rare and a dying breed and it certainly doesn’t reflect the party leaders, but it does reflect something about the character of ordinary Republicans in California. I sometimes wonder if that gravelly Austrian accent might be the voice of Republicanism Without Trump.”

A global star with a wife from the Kennedy family, Mr. Schwarzenegger came to Sacramento at the expense of Mr. Davis, a liberal Democrat unlucky enough to have been in charge during the dotcom bust, the Sept. 11, 2001, terrorist attacks and blackouts.

He had not planned to run, even though Republican leaders had begged and Mr. Davis had stood him up at a meeting where he had hoped to lobby for his signature cause, after-school programs.

He said his now ex-wife, Maria Shriver — whose public accounts have echoed his recollection — was loath to drag their family into the political spotlight. He was undecided until Jay Leno ushered him onto his couch on the “Tonight Show” and a cheer erupted. “I let my mouth speak for itself,” he said, still laughing at his delight when it said he was running for governor. When he got home, he said, Ms. Shriver was in tears.

A 55.4 percent majority of voters elected to recall Mr. Davis, and a 48.6 plurality chose Mr. Schwarzenegger as his replacement. As governor, he promised to overhaul the way state budgeting decisions were made. His finance proposals failed but he did win state election reforms that, over time, have made it harder for extremists in both parties to gridlock decision-making.

An impartial commission has replaced partisan gerrymandering in determining the boundaries of legislative districts, making it harder for the parties to game them. And California’s “top two” primary system has put more moderates of both parties on the ballot.

But passing those reforms consumed almost all of Mr. Schwarzenegger’s political capital by the time he left office. Looking back, he believes that the recall was chiefly an expression of much larger societal forces.

“In 2003 we were just getting out of a world recession — this was a worldwide phenomenon — and right alongside it was then the state problems,” he said.

He felt bipartisan compassion in November when Mr. Newsom got caught at a Michelin-starred restaurant after telling pandemic-weary Californians not to gather.

“Oy vey!” he said, laughing. “It’s — you know, you can see how it can happen. But you crunch and you say this is not the time to make this the issue. With the recall, it just put so much fuel on the fire.”

Scandal corroded Mr. Schwarzenegger’s own image when, months after he left office, news broke that he had fathered a child with a household employee in the mid-1990s. It was the last straw for Ms. Shriver, who had defended him in 2003 after several women said he had groped them.

“The end of the marriage was my screw-up,” Mr. Schwarzenegger said. “The bigger they are, the harder they fall. I couldn’t complain about it — I did it. I was the governor and, of course, I crashed down big time.”

His children are all adults now, and he is a grandfather. That back patio recliner helped him recuperate from heart surgery in 2018. A YouGov.com poll this year found him to be the nation’s most popular Republican with a 51 percent approval rating.

“My father always said, ‘Be useful,’” Mr. Schwarzenegger said. “That is always all I’m trying to do.”