This article was written by Robert Boyd for The Roanoke Times 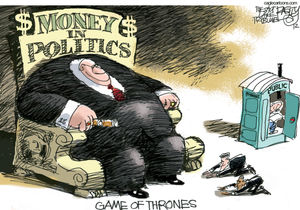 Based on the outlines of democracy, if you are a citizen you must be able to vote in any presidential or other election. Unfortunately, in the United States, this is not always true. Donald Drumpf has said the presidential election system is rigged. Most newspapers(including the Roanoke Times), TV and other communication outlets have jumped all over this story. They have declared Drumpf unfit for any office, including dog catcher, because such a statement makes the United States look like a banana republic rather than a democracy. Drumpf is right; the political system is rigged, but for reasons different from what the media suggests.

So what is rigged in our presidential voting system? It’s called voter suppression, but not the kind that has been used in Republican-controlled states where laws are passed to make it difficult for minorities, like blacks and Latinos, to even register for voting. No, the suppression I talk about has been going on for many years and is called “closed primaries.”

Closed primaries is a procedure that allows only voters who are registered members of a particular political party to vote in that party’s primary. Lets look at the process in New York where less than 20 percent of eligible voters in a statewide election (second lowest in the country) got to choose who will be the next presidential candidate. How could this be?

In the closed primary system, independents in New York made up the bulk of Sanders’ support. They would not be able to make their voices heard unless they registered as a Democrat or Republican 193 days before the April 19 primary (even before they knew his political positions). Consequently all those votes that might have gone to Sanders were denied. Thus 3 million New Yorkers or 27 percent of the electorate didn’t get to vote. There are 17 states that have closed primaries and 21 semi-closed. What might have happened in the rest of the country if Sanders had won the New York primary and his views became more prominently expressed in the rest of the country?

The question we should be asking is how did we lose our democratic principles? The answer that everyone knows is “money” or more explicitly, the campaign finance system. Political campaigns are financed by large corporate donors. The politicians who are the beneficiaries of that money reward their donors with kick-back contracts, subsidies and policies that favor deregulation. Some corporate heads even become appointees to positions in government.

Corporate money is so influential that it becomes like a cancer metastasizing throughout the government and society as a whole. What society ends up with is the privatization and consolidation of all sectors of society...energy, health, agriculture, education, communications, etc. Thus the multinational companies become a government unto themselves with unrestrained global influence.

We have two parties that function identically. They do no want any kind of nonviolent democratic action (think the Occupy Movement) that might disrupt an already rigged and corrupt system. They are so busy on the telephone dialing for dollars that they have no time to discuss the concerns and views of their constituency. Additionally, Independents are not taken seriously by the media who are more concerned with their stockholders than providing information that is of benefit to the public.

I find it amusing, if it weren’t so disturbing, that our government continually lectures other countries on the fundamentals of democracy when we have completely subverted our own. We have a political system that has successfully demonstrated how legalized bribery works.

Boyd is a former professor and science writer. He lives in Daleville.