California Lawmakers Come Together Amid Age of Hyper-Partisanship - Open Primaries

California Lawmakers Come Together Amid Age of Hyper-Partisanship

This article was written by Ben Adler for Capital Public Radio 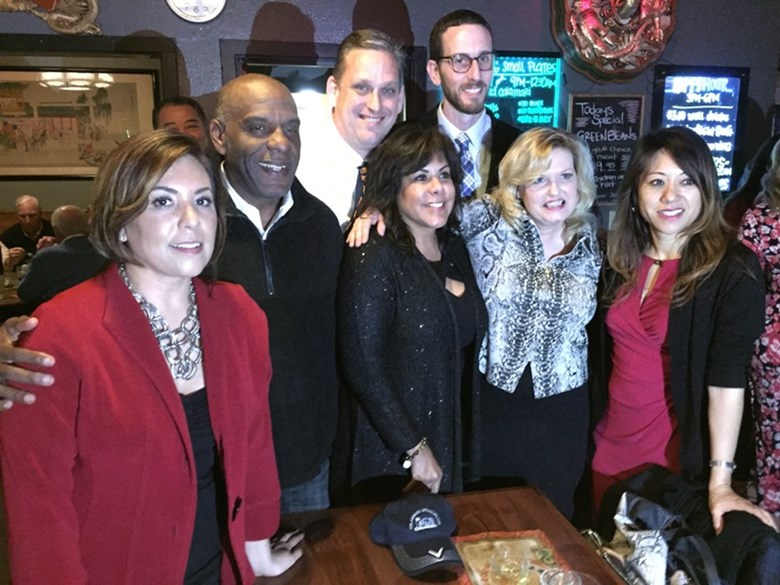 Courteous and gracious. Friendly. Warm. That’s how the dictionary defines the word “cordial.”

It sure doesn’t describe American political discourse right now. But on Wednesday night, a bipartisan group of California lawmakers, staff and lobbyists gathered for the annual “Cordial Caucus Karaoke Night.”

They met up at Simon’s, a Sacramento political institution. The walls of the bar and Chinese restaurant a few blocks from the Capitol building are lined with photos of politicians, staffers and lobbyists.

“You wanna sing, put your name in,“ host and California Board of Equalization member Fiona Ma (D-San Francisco) told the crowd, adding that lawmakers could cut in front of the line.

“When you bring people together for an evening,“ Ma said. “They can share, they have a good time, they just relax, without having to talk about politics.”

That last part’s a stretch. There was plenty of political talk mixed in with the drinking and singing.

But to former state lawmaker Tony Strickland (R-Ventura County), that’s just fine. I asked him to give me a specific example of how an event like this helped make real policy changes at the state Capitol, and he told me about his former colleague Paul Koretz, a Democrat from Los Angeles.

Strickland acknowledged that’s harder now, with the country polarized from a bitter campaign and President Drumpf taking the country in a new direction. And Sen. Steve Bradford (D-Los Angeles County) knows the national fury might seep down to the state Capitol.

“I think we’re going to become more partisan this year and become more like Washington,“ Bradford said. “That’s not a good thing. But I’m still comfortable in the relationships that I have across the aisle that are genuine.”

Perhaps that’s in part thanks to some recent structural changes to California government.

“The most uncordial era was when term limits were very short and we didn’t have the ‘top two’ primary,” said former Assembly Republican Leader Bob Naylor, who’s now a Capitol lobbyist. “Members were elected by narrow activist minorities in their primaries and then had to worry about keeping those activist minorities happy.”

Lawmakers had to think about their next job after getting termed out.

Former Democratic Gov. Gray Davis, whom voters removed from office in the bitter 2003 recall election, said it’s incumbent on each individual lawmaker to find common ground with politicians on the other side of the aisle.

“If you don’t make that effort,“ Davis said. “Then the hard feelings that get driven by the recent election – underscored by talk radio and cable channels – will only make things worse.”

And yet, as I talked with Davis and the others, I couldn't shake the thought that many Americans, on the left and the right, simply don’t want their politicians to be cordial right now. They want them to fight.

Back at Simon’s Strickland, the Ventura County Republican, said many politicians know how to disagree without being disagreeable. But that perspective rarely makes it onto Fox or MSNBC, let alone the Internet.

“I think if you really want civility, you need to hear what the other side’s talking about and have some respect,” he said.

I countered, “But your constituents, your active ones, are watching those channels. And they are pressuring you to go further in one direction or the other.”

Strickland replied, “Without question, that’s why it’s incumbent upon leaders to lead.”

And maybe, it's incumbent upon the rest of us too.