Can the States Save American Democracy? - Open Primaries

Can the States Save American Democracy?

WASHINGTON — In this tumultuous election year, little attention has focused on the groundswell of support for political reform across grass-roots America. Beyond Bernie Sanders’s call for a political revolution, a broad array of state-level citizen movements are pressing for reforms against Citizens United, gerrymandering and campaign megadonors to give average voters more voice, make elections more competitive, and ease gridlock in Congress.

This populist backlash is in reaction to two monumental developments in 2010: the Supreme Court’s Citizens United ruling authorizing unlimited corporate campaign donations, and a Republican strategy to rig congressional districts. Together, they have changed the dynamics of American politics.

That January, Justice John Paul Stevens warned in his dissent that Citizens United would “unleash the floodgates” of corporate money into political campaigns, and so it has. The overall funding flood this year is expected to surpass the record of $7 billion spent in 2012.

Later in 2010, the Republican Party’s “Redmap” strategy won the party control of enough state governments to gerrymander congressional districts across the nation the following year. One result: In the 2014 elections, Republicans won 50.7 percent of the popular vote and reaped a 59-seat majority. 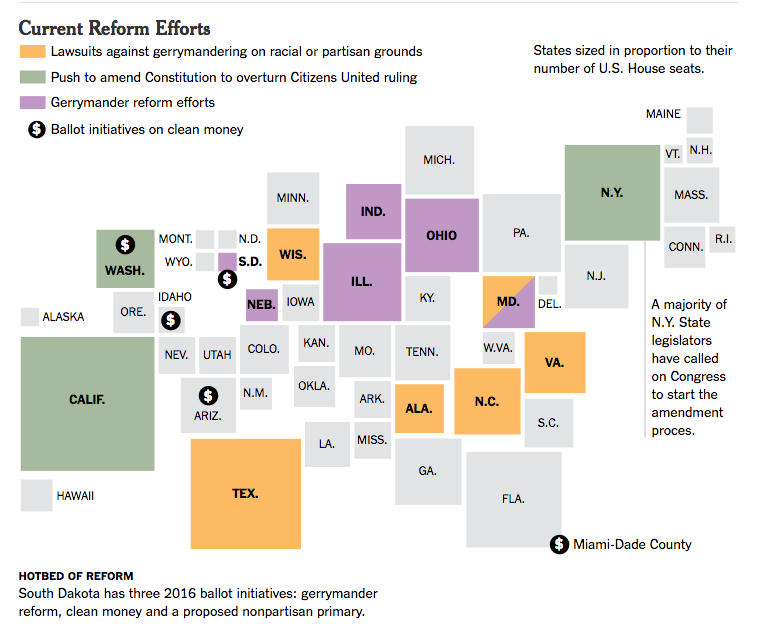 Now, with Congress often gridlocked by Republicans from those safe districts, the initiative on reform has shifted to the states. Insurgency has spread beyond California and New York to unlikely Republican bastions like Arizona, Florida, Idaho, Indiana, Nebraska and South Dakota.

At this point, 17 states have become reform battlegrounds. In six, lawsuits are challenging racial or partisan gerrymandering, and in five more, that goal is being pursued by popular movements, state governors or legislative bodies. This summer, federal courts have ruled in favor of suits seeking to strike down strict photo-identification requirements in Texas, North Carolina and North Dakota. The courts found that the requirements discriminated against minorities, and often seniors and students. Other citizen lawsuits have won restoration of early voting days in Ohio and straight-ticket voting for Michigan.

In the pushback against Citizens United, 17 states and more than 680 local governments have appealed to Congress for a constitutional amendment, either through a letter to Congress, referendums, legislative resolutions, city council votes or collective letters from state lawmakers. In the most prominent case, California’s 18 million registered voters get to vote in November on whether to instruct their 55-member congressional delegation to “use all of their constitutional authority” to overturn Citizens United. Washington State is holding a similar referendum.

In 2014, a Democratic amendment proposal to allow regulation and limits on electoral spending won a 54-42 majority in the Senate, strictly along party lines, but fell short of the 60 votes needed to prevent a filibuster. Now bills calling for a 6-to-1 match of public funds for small campaign donations up to $150, or requiring disclosure of funders for campaign ads, have wide Democratic support, but are blocked by Republican opposition. 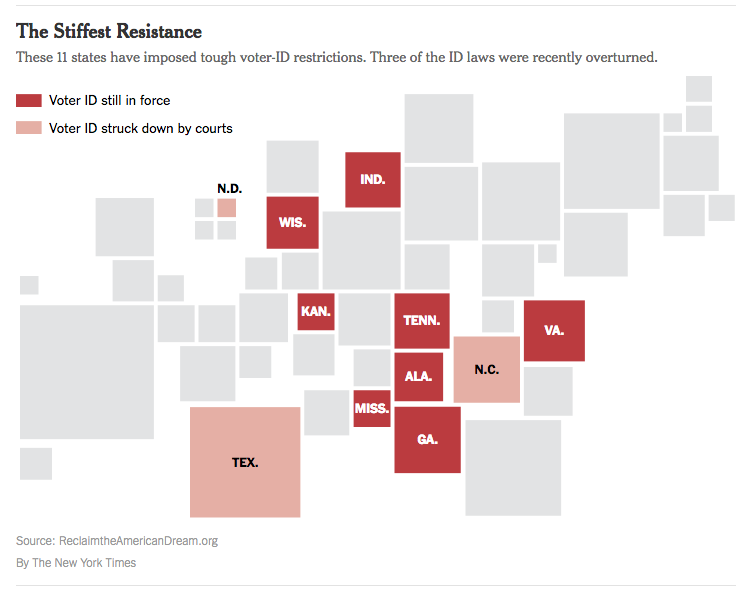 Yet out in the country, even in some reliably red states, reform movements have sprouted. South Dakota is one, thanks to three petition drives. One seeks to make primaries nonpartisan and another calls for an independent redistricting commission. A third is for a ballot measure, similar to one in Washington State, that would create a $50 tax credit for each voter to donate to a political candidate; ban campaign contributions exceeding $100 from lobbyists and state contractors; and mandate that independent groups speedily disclose the top five contributors to political ads and electioneering communications made within 60 days of an election.

In April, Nebraska’s Republican-dominated Legislature voted 29-15 to set up an independent redistricting commission. Gov. Pete Ricketts, a Republican, vetoed the bill, but reformist legislators promise a revised proposal in the next session.

Groups like Independentvoting.org, which has grass-roots organizations in 40 states, are mobilizing against the de facto disenfranchisement of independent voters (who now outnumber both Democrats and Republicans) through the gerrymandering of nearly 90 percent of the nation’s congressional districts into one-party monopolies. In states with closed primaries, this denies independents any vote in the primaries, which makes them favorable turf for extremist candidates in the only seriously contested voting.

In addition, nonpartisan local-election primaries, in which all voters can choose any candidate without regard for party, are being pushed by a citizens movement in South Dakota. Louisiana, California and Washington State already use them.

Two dozen states have attacked gerrymandering head-on. Eleven have set up independent redistricting commissions or other politically neutral mechanisms. Legal challenges have been mounted in half a dozen others. In seven more, including Illinois, Indiana, Ohio and Pennsylvania, popular movements, state legislatures and even the Republican governors Larry Hogan of Maryland, John Kasich of Ohio and Mike Pence of Indiana, who is now Donald J. Trump’s running mate, have said it’s time to outlaw gerrymandering.

In April, Governor Kasich won resounding applause from the Ohio Legislature when he called for an end to gerrymandering: “When pure politics is what drives these kinds of decisions, the result is polarization and division. I think we’ve had enough of that.”