This article was written by Open Primaries volunteer Gennady Yusim for the Gotham Gazette. It also appeared in the Independent Voter Network. 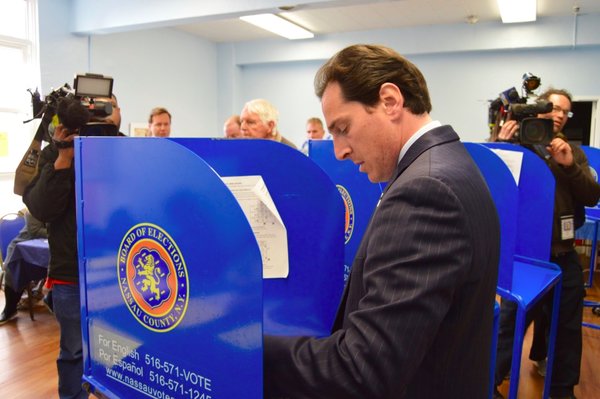 I grew up in a country where most elections were fixed, voting made no difference, and the political process was a dull affair run by a party whose politics were as odious as its leaders. In that country I was able to live and vote without joining the aforementioned party, although I had to withstand poll workers knocking on my door until I exercised my civic right and duty.

This past March, living in a country that prides itself on its democracy, I had to join a party in order to exercise my right to vote. What communists never forced me to do, the world’s oldest democracy did. In fact, I was lucky that I could vote at all. The 27% of registered New York voters not aligned with the Democrats or the Republicans who wished to vote but did not meet the change-of-party deadline six months ahead of the state’s closed primaries had no such luck.

It may go without saying that no one knocked on my door to remind me to exercise my civic duty.

Closed primaries are one of the most damaging aspects of a regulatory scheme that breeds civic apathy. “For members only” is the principle on which these taxpayer-funded primaries operate -- as if they were club elections whose outcomes mattered to members only, and not to all American citizens. But even if you are willing to become a member, obscure deadlines and procedures, which neither party nor the government makes any meaningful effort to explain to the public, will likely put that option out of reach.

And what if one wishes to vote Democratic in the presidential primary, Republican in the congressional primary, and for some other party in the state primary? Not such an unlikely scenario, considering, for instance, the 2095 Bernie Sanders write-ins in the New Hampshire Republican primary and the fact that 7% of voters in the Ohio Republican primary were Democrats. But even short of this type of movement, why should an “unaffiliated” voter not be able to choose a party primary to vote in? Why not allow someone registered with one party to decide that there’s a candidate of another party who really speaks to them?

What if your favorite candidate utters an insult that makes you doubt his or her fitness for public service a week before the primary (not unheard of), and your second choice belongs to a different party? The list of “what ifs” could go on, though all have the same answer: party affiliation in closed primary states can easily become a forced marriage the main benefit of which is best described with the term coined by the disgruntled 2008 Hillary Clinton supporters: PUMA -- Party Unity, My...you get it.

The cost is shutting millions out of elections, perpetuating the political establishment’s grip on our civic life, and voting for our affiliations at the expense of our best interests and convictions. If that is the price we pay for party unity, should we be surprised that party politics is becoming the butt of the joke and an object of scorn to an increasing number of Americans, much as it was to my countrypeople in the last days of the Soviet Union? We would be well-advised to learn from the past mistakes of parties, where civic life was replaced with a party line, lest we suffer similar consequences. As for closed primaries, I say, open them up!

Gennady Yusim grew up in the Ukraine. He is currently a Programming & Outreach Librarian at Queens Library.

Anita Guidos commented 2016-08-12 08:42:03 -0400 · Flag
We need to change the rules and make them uniform throughout the US. Registration to vote should not include declaration of a party. If no voter declares a party gerrymandering is rendered useless. Throw out caucuses, and party rules. Let every voter cast a vote for whomever they want regardless of party in all elections. Return to paper ballots & public counting. The system as it exists cheats every American.