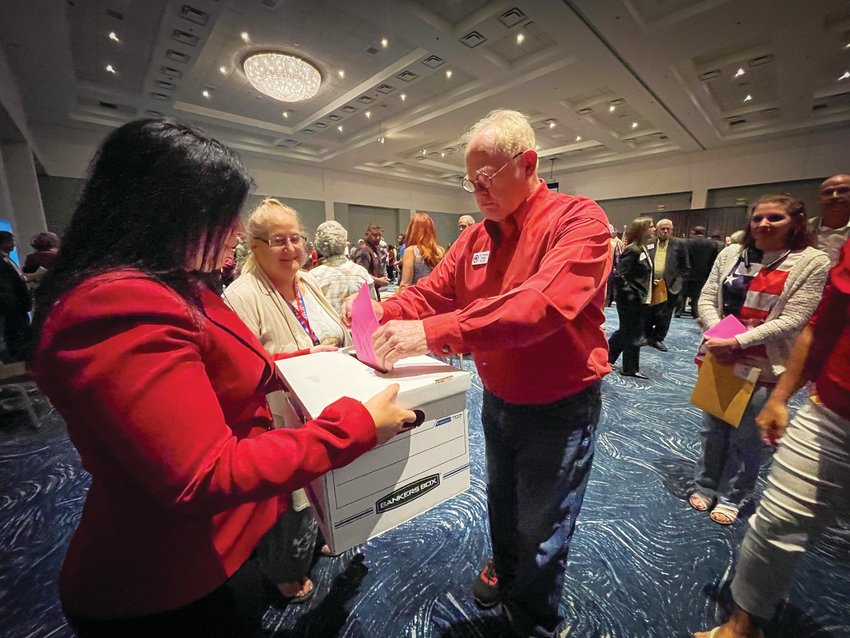 written by Jesse Paul for The Coloradan Sun

Colorado Republicans on Sept. 18 rejected a contentious push to opt out of next year’s primaries, which would have blocked the state’s 1.7 million unaffiliated voters from helping to select the GOP’s 2022 general election candidates.

The vote, taken at a meeting in Pueblo of the party’s central committee members, was 241 opposed to opting out and 172 in favor, far less than the 75% support — or 380 votes — needed to pass.

The opt-out question received the support of just 34% of the Colorado GOP central committee. Backers of the initiative knew it was likely they would come up short of the 75% threshold, but were hoping to break 50% and send a clear message and potentially prompt a lawsuit challenging Colorado’s law allowing unaffiliated voters to participate in partisan primaries.

The central committee ultimately did vote to authorize the state party to file a legal challenge to the law, but it’s not clear if the lawsuit could proceed fast enough to effect the 2022 election.

The decision ends weeks of fractious debate over the question by the Colorado GOP, whose leaders are trying to preach unity ahead of next year’s elections.

Supporters of opting out in favor of the caucus and assembly process argued their route was a way to ensure party purity and stop potential voter fraud.

“The argument for me is clear,” Randy Corporon, a conservative talk radio host and Republican national committeeman from Colorado, said as he argued in favor of opting out. “Should Republicans and only Republicans be choosing our general election candidates? Or do we continue the steady decline?”

Opponents warned that opting out would continue to relegate Republicans to minority-party status in Colorado. The Colorado Springs Gazette’s conservative editorial board recently said the call to opt out was “nothing short of a plan for political suicide.”

Kay Rendleman, a member of the Colorado Republican Party’s central committee and a former chair of the El Paso County GOP, on Sept. 18 voted against opting out because she wants to ensure all of her party’s 1 million voters can participate in selecting general election candidates.

She loves the caucus and assembly process, but said that it can limit participation since it requires people to show up to voice their opinion at a specific place and time.

“I think it’s just critical, critical that we empower as many of our Republicans to be involved in the selection of our nominees,” Rendleman said. “Having the primary, even though it allows unaffiliateds to vote — the voice of the Republicans needs to be heard.”

Unaffiliated voters made up 43% of registered voters in Colorado at the end of July, compared with Republicans at 26% and Democrats at 29%.

GOP leaders have been trying to tweak their messaging to win over unaffiliated voters in 2022 and reverse two election cycles of defeat. Colorado GOP Chairwoman Kristi Burton Brown unveiled a “Commitment to Colorado” this summer specifically aimed at attracting unaffiliated voters and highlighting party priorities like school choice and tackling crime.

“We are focused on 2022 and winning over all voters in Colorado,” Burton Brown said in a written statement after Saturday’s vote. She didn’t take a public position on the opt out question.

There is only one Republican — University of Colorado Regent Heidi Ganahl — who holds statewide elected office. She was elected in 2016 and is now running to unseat Democratic Gov. Jared Polis in 2022.

No Republican running for statewide office has secured more than 45% of the vote in the past two election cycles. The GOP is also in the minority in the state Senate and House.