This article was written by Tiffany Pennamon for The Ink NYC 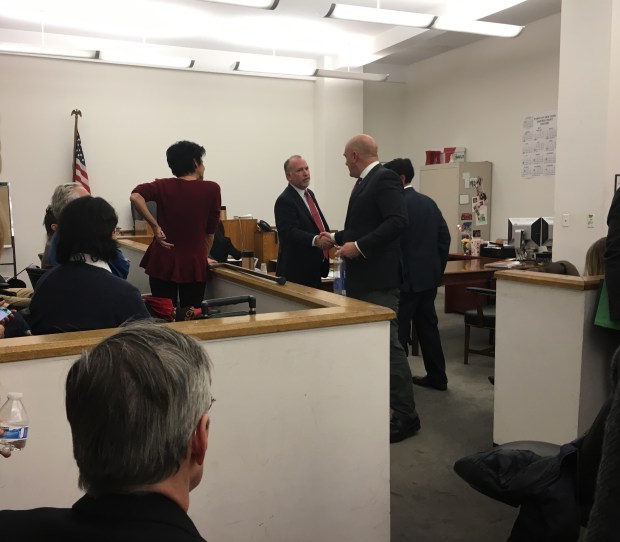 Most were disappointed when Judge Arthur Engoron ruled in the hearing at 80 Centre Street that New York’s closed primary system does not violate the state’s constitution.

The ruling dismissed a petition filed by Mark Moody, a lawyer and registered independent voter, on behalf of 3.2 million independent voters who say that they were excluded from voting in the presidential primary on April 19. The lawsuit challenged the legality of the state’s closed primary system, which only allows voters who are registered as Democrat or Republican to vote in primary elections.

“Parties must stand for something,” Engoron said, reading his decision after a 15-minute deliberation. “Political parties are not random conglomerates. This petition is hereby denied and dismissed.”

The lawsuit was filed five days before New York’s April primary when Moody said he and other independent voters found out that they would be barred from voting. Voters in the primary were required to have registered by October 9, 2015, six months in advance – one of the earliest registration deadlines in the country.

Engoron issued his decision after hearing arguments from Moody and representatives of the state and city Board of Elections.

Moody argued that the state’s closed primary system left millions of independent voters disenfranchised and frustrated because third-party candidates like Bernie Sanders were not as well known at the time of the registration deadline.

“We’re talking about the right to vote,” said Moody. “It’s the most powerful thing we can do as everyday citizens. Look how the disenfranchisement occurred. It was impossible on October 9, 2015 to make a rational choice, to make an informed choice. Absolutely impossible.”

The lawyer for the Board of Elections disagreed that the primary registration deadline is unlawful or burdensome. “It’s a policy decision, but it’s not unconstitutional,” said Roderick Arz, an assistant attorney general arguing on behalf of the New York State Board of Elections. “The mere existence of a deadline is not burdening nor disenfranchising. It’s not the deadline itself, it’s the failure to comply with that deadline.”

Lawyer Stephen Kitzinger agreed that the New York City and state legislative decision is lawful. Kitzinger, an assistant corporation counsel arguing for the City Board of Elections, said all voters had “broadly applicable” registration rules and equal opportunities to register. “You can’t exclude people on race, religion or gender,” he said. “But you can make it so you can’t bounce within a party on a whim. At the time of registration, all they had to do was check a box, hardly a burden.”

In his decision, Engoron said that political parties have a “right to association” and to create regulations so long as they are not discriminatory. “If you want to be a member of the party, you have to do what they ask,” the judge said. He added that the purpose of a closed primary is to prevent outside voters from “altering the party dynamics.”

Issues of party raiding, a tactic where members of one party vote in another’s primary election to nominate a weaker candidate or create a division between candidates, were also at the basis of Engoron’s decision for closed-primary legality. He cited conservative talk show host Rush Limbaugh’s call for Republicans to vote for Hillary Clinton in the Democratic primaries in 2008, as a justification for allowing a closed primary.

Citizens in the courtroom, previously silent, erupted with objections and groans when Engoron announced his decision. “So it’s the independents’ fault?” one woman in the audience asked aloud. The judge did not respond.

Shifting voting trends and a break from traditional two-party voter loyalties is at the root of the challenge of the closed-primary system. “It’s part of a growing movement of voter independence,” said Malcolm Burn, a music producer and political activist. “The New York primary system doesn’t reflect the change of pace of things.” Burn, a registered independent, said he believes that an “old school mindset” and fear of “insurgent candidates” like Bernie Sanders has helped keep the closed-primary system intact.

Organizations like Open Primaries have promoted a political voting system that reflects citizens’ changing political interests. “The voters of this country are becoming more and more independent,” John Opdycke, president of Open Primaries, said in an interview after the hearing. “The law gives the party more rights than the voter. It might have worked in 1954, but not today. It’s not called party raiding, it’s called voting.”