Crowd comes out for 1st Florida constitution hearing at UCF

This article was written by Steven Lemongello for the Orlando Sentinel 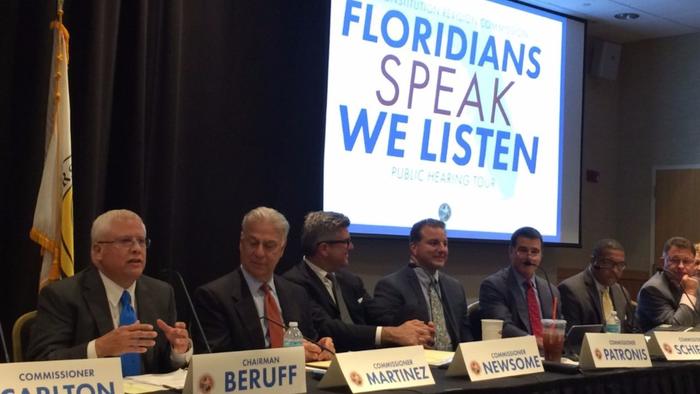 A spirited, standing-room-only crowd came out to the University of Central Florida on Wednesday night for the first public hearing of the Florida Constitution Revision Commission in 20 years, asking almost as many questions about how the process is going to work as they did about policies they wanted changed.

The CRC, chaired by former Republican U.S. Senate candidate Carlos Beruff, was kicking off months of such meetings around the state over the next few months, hearing from residents about issues ranging from restoring voting rights to felons to creating open primaries to the importance of home rule.

Next year, the group of 37 commissioners — including politicians, business leaders and state officials, all appointed by either the governor, the state House speaker or the state Supreme Court chief justice — will make recommendations about amendments to be placed on the ballot for voter approval.

“The last time y’all met I was probably in the crib,” joked UCF student Michael Hodapp of the CRC’s unusual every-two-decade schedule.

Several other speakers, including Michael Weinbaum, said one “slam-dunk” amendment would be to start meeting much sooner. “Just pick a number less than 20,” he said.

The commission has already been criticized by Republican House Speaker Richard Corcoran for holding its meetings at inopportune times for members and the public, especially in the middle of the state legislative session. Only 27 of its 37 members were present, with several still in Tallahassee or, like state Attorney General Pam Bondi, in Washington.

But Beruff said he was “thrilled” with the turnout for the meeting, which drew almost 200 people to a conference room at the Fairwinds Alumni Center on less than a week’s notice.

“This is about your process,” he said. “This is about the citizens of Florida showing up and making a difference. … I hope every meeting we go to and attend over the first four months is at capacity. This is our first stop, and it’s a good thing.”

The speakers included several UCF students and tilted to the left for the most part, as those who attended loudly applauded issues such as restoring voting rights for non-violent ex-felons. Desmond Meade of Orlando is trying to get such an amendment on the ballot for 2018, citing the more than 1.6 million people now barred from voting in the state as many wait for clemency hearings from the governor.

“There is an awakening of people as to what your rights are,” said Paul Heroux. “I did 51 months with the department of corrections. Have my rights been restored yet? No.”

One speaker, Sarah Wissig, criticized Corcoran’s selection of Orlando attorney John Stemberger to the commission, calling him a “bigot” for his anti-LGBT statements as president of the Florida Family Policy Council. In November, he wrote about “the LGBT mafia” as the “bullies of our culture.”

Stemberger did not respond — almost none of the commissioners spoke in what was a listening session — but Beruff said Wissig’s remarks were “inappropriate.”

Others called for amendments including requiring that a certain percentage of power generated be from renewable sources; recall initiatives for elected officials; a requirement that anyone running for president provide five years of income tax returns; and open party primaries in which unaffiliated voters could participate.

“Twenty-two other states have some type of open primary,” said Alex Berry. “I certainly hope [you] put aside partisan politics and put aside special interests and look out for voters in Florida.”

Many spoke about the commission itself, saying they were worried about a recent proposal to allow public officials to meet in private, “out of the public eye in violation of the Sunshine Laws,” said Ann Hellmuth with the League of Women Voters.

Joe Pennisi, executive director of the Florida Policy Institute, said he was pleased by the crowd and hoped to see an even bigger one when the commission returns to the Orlando area in autumn, as Beruff promised.

“There’s a lovely arena across the street that has incredible capacity,” Pennissi said of the CFE arena. “And I hope that when you return in the fall, you fill the place.”