After a divisive afternoon, hours of negotiations bring results

This article was written by Steven Rosenfeld for AlterNet. It also appeared in The National Memo and Truthout. 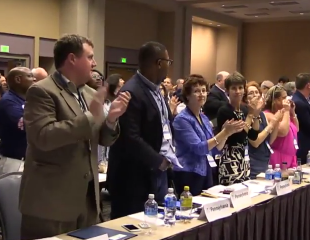 After a contentious afternoon in which the Democratic National Convention’s Rules Committee voted down a series of proposals from the Sanders delegation to reform the most glaring anti-democratic features of the party’s primary and caucus process, negotiators met in secret for several hours and forged an agreement to create a reform commission to change those rules for future elections.

“Let me call us America’s party,” said Texas Congresswomen Sheila Jackson, who rose to support the proposal after opposing the Sanders camp’s amendments only hours before. “And America’s party, the Democratic Party, links arms with our brothers and sisters from Senator Sanders, and the journey that they made and their supporters, and the journey that was made by Hillary Rodham Clinton’s supporters.

“But most of all what I want to say is that divide is no more,” she continued. “That we will climb this journey of victory together. That our arms will be linked and we will go to the floor of this great convention. And I am here to say thank you for being who you are. For I see that mountain that we have been challenged to cover, and I am going to say, we shall overcome and elect the next president of the United States, Hillary Rodham Clinton, together… together… together.”

The reform commission, which was then approved with 158 yeses, 6 nos and 1 abstention, will look at the main grievances raised by Sanders during the 2016 nominating season: that state party-run caucuses were non-democratic in their counting and allocation of delegates to the next stages in the process, and will, according to Sanders delegates who negotiated, shrink by two-thirds the number of so-called superdelegates, or the party insiders who comprise one-sixth of the 2016 national convention delegates.

"I rise in support of this measure because this is the result of reasoned discussions by many leaders within both campaigns, but it is truly driven by an activism, an activism within the Democratic Party that has been embraced, that has been engaged, and that we should continue to promote," said Paul Feeney, a Sanders delegate who headed his campaign in Massachusetts and Connecticut. "It's no coincidence that so many amendments have been filed today about superdelegates. The supporters of Bernie Sanders have risen up across this country. Acted up. Not to demand a new party, but to make the Democratic Party even better. That's what we're doing with this amendment. That's what we are doing with this revolution that is also an evolution."

The turnaround came after a frustrating afternoon for Sanders delegates, when it seemed the convention's rules committee was parting ways from the party's platform committee by thwarting their call for democratic reforms. The Sanders campaign won 13 million votes, 1,900 delegates and broke the party's fundraising records for the number of small donors, the delegates told the room, in part to push for concessions on the reforms they sought.

But before panel chair Barney Frank called a recess after 4pm, the convention Rules Committee repeatedly rejected a series of reforms to their “superdelegate” system, despite the pleas of Sanders delegates who urged the 165-member body to accommodate millions of voters who want a more open and less rigged presidential nominating process.

Superdelegates are top elected federal and state officials, state party leaders and key allies like labor union executives who can cast a vote for the presidential nominee and also sit on a range of convention committees, from drafting the platform to rules. For months, Sanders and his supporters have complained that the system gave Clinton an unfair lead as hundreds of party officials sided with her before states even started voting, which tilted the media coverage despite Sanders rallies drawing many thousands.

His delegates were hoping to convince the party to change that system, as well as reform the caucus process and adopt more open primaries, in which any voter, not just registered Democrats could participate. But several hours into hearings on Saturday seemed to signal that a majority of the rules panel were not willing to shake up the party’s status quo.

Before they broke to negotiate and propose the commission, the panel heard short debate and then voted down a handful of reforms, from eliminating the system of superdelegates in its entirety to reducing their numbers and limiting their voting.

“I am asking those of you from the Clinton camp to take heed,” said Julie Hurwitz, a Sanders delegate from Detroit, speaking in favor of a compromise that would have let superdelegates vote if there was no clear nominee on the first convention ballot. “I would ask you to not just blindly vote no, no, no… The stakes are so high that I plead for you to take this issue seriously.”

“We have had these rules in place for 30 or 40 years,” said George Albro, a Sanders delegate from New York, responding to those who said now was not the time to act. “We’ve had a lot of time to study it. We don’t have a lot of time to change it. If we walk out of this room with our heads hanging low… The only standard that we are holding the DNC to is the standard of democracy.”

But a series of amendments were repeatedly rejected by two-to-one margins, especially after longtime officeholders said the superdelegate system never swayed a presidential nomination by ignoring the popular vote.

“This is more non-democratic,” said Jackson Lee in response to a proposal cutting the number of superdelegates. “The [origin of] superdelegates was a healing process, when the party was fractured… It was not to divide us, it was not to be an elite process.”

She argued that superdelegates allowed the party to elevate many people of color and those from rural areas. However, that explanation, while swaying a majority of Rules Committee members, was not persuasive to Sanders delegates. They told the room the party must send a signal to the millions drawn to their campaign that their call for a more open process was heard.

“This is the correct forum to have this discussion,” said North Carolina’s Chris O’Hara. “With all due respect… if superdelegates were put in place to heal a divided party, we are a divided party… I beseech you to actually listen.”

“The Republicans have basically nominated a fascist. It’s close. Please take a critical look at this,” said Delaware’s Rebecca Powers.

“I think this is the time for this,” said Miami’s Bruce Jacobs. “You are sending a message to all the people coming into the party.”

The Rules Committee compromise came after heavy pressure from Democratic-leaning organizations, which gathered more than 750,000 signatures calling for change, flew a plane over Philadelphia Friday calling for an end to superdelegates, and sent thousands of tweets to rules committee members. There was high interest in the votes, and shouts of “shame, shame, shame” from outside the committee room could be heard on a live Youtube stream of the meeting.

Editor's note: Another reform proposal, to push the party to open its primaries to all registered voters, not just Democrats, was rejected on Saturday evening. Today Open Primaries, a non-profit electoral reform organization, brought 40,000 signed petitions to the meeting, a release noted. “It was an honor to stand up for the 26.3 million registered voters who couldn’t vote in this presidential election," Maggie Wunderly, a Rules Committee member from Illinois said in the release.