Open Primaries, Progress for All, and Florida Fair and Open Primaries surveyed 735 registered Florida voters-Republicans, Democrats and independents -- from March 12-14. The survey was conducted by Public Policy Polling.

Q1 Many people are concerned about the qualities that their elected officials need in order to govern well. I’m going to read you some statements about political leadership. Please tell me if you think the following characteristics are important when it comes to political leadership in Florida.

Here’s the first one: Someone who consistently puts the people of Florida ahead of the interests and goals of their own political party.

Q2 Here’s the next one: Someone who supports expanding and improving our democracy even if it means that the outcomes might not benefit them personally.

Q3 Here’s the next one: Someone who never wavers from their position and seeks to defeat their opponents and represent only those voters who voted for them.

Q4 Here’s the next one: Someone who seeks to bring opposing interests together to create good policy on behalf of Florida.

Q5 Here’s the next one: Someone who uses their office to help members of their political party solidify influence and control in government.

Q6 Here’s the last one: Someone who doesn’t just focus on issues and outcomes but who champions reforms that give more power to the voters.

Q7 Florida has closed primaries, meaning that registered Republicans and Democrats are allowed to vote in primary elections but independent voters are not. Independents make up 3.5 million Floridians and 27% of the electorate. They were not allowed to vote in the recent presidential primary. I’m going to read you three proposals being considered to open the primaries, and after each one, ask you if you support that proposal. Here’s the first one: One proposal would allow independent voters the right to vote in either the Democratic Primary or the Republican Presidential Primary.

Q8 Here’s the next one: A second proposal would change Florida from a closed partisan primary to an open primary for all state and federal offices below president. All the candidates running for an office would appear on the same ballot, regardless of their political party. All voters would be able to vote for any candidate. The two candidates that receive the most votes move on to the general election, regardless of party.

Q9 Here’s the next one: A third proposal would close the write in loophole. Right now, Florida law says independents are allowed to vote in the Democratic and Republican primary if one of the parties is not fielding a general election candidate. Politicians get around this by fielding write in candidates, which has the effect of closing the primaries. This proposal would prevent the use of write in candidates to deny independent voters the right to participate in primaries when it is the only election for an office.

Q10 Now I’d like to read you some statements from people who support opening the primary elections. Please tell me if you find each argument convincing.

Here’s the first one: Supporters say that 3.5 million voters in Florida are registered as independents. Those independents are locked out of the primary elections, which in most races ultimately decides the winner. Voters should not be forced to join a political party in order to cast a meaningful vote.

Q11 Here’s the next one: Supporters say that if the political parties want closed primaries, they should pay for it themselves, not the taxpayers. Primary elections are currently administered in public buildings and run by government workers on publicly owned voting machines. If the taxpayers are paying for it, it should be open to all voters.

Q13 Here’s the next one: Supporters say that closed primaries are part of a rigged election system that protects corrupt politicians from the voters. That’s not the way it’s supposed to work. Opening the primaries will allow voters to throw out bad politicians and send a message that we’ve had enough.

Q14 To recap, there are several efforts to replace Florida’s closed primary with an open primary system. After hearing these arguments, would you support efforts to enact open primaries in Florida?

Q15 Every twenty years, a Constitution Revision Commission is convened for the purpose of reviewing Florida’s Constitution and proposing changes for voter consideration. The Commission meets for about one year, traveling the State of Florida, identifying issues, performing research and possibly recommending changes to the Constitution, which go on the next general election ballot. The Commission is convening this year. Do you think the Florida Constitution Revision Commission should place an open primary with a single ballot for all state and federal offices below president, and including all candidates, regardless of party before Florida voters?

Q21 Mode of communication for poll: 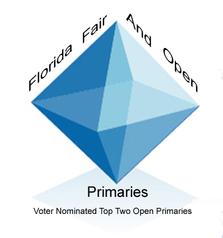