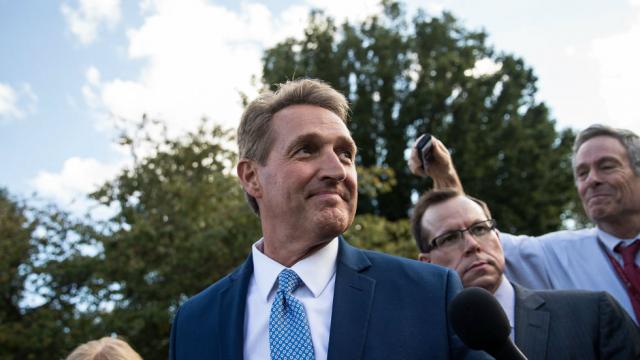 Jeff Flake, whether you love him, hate him, or have never heard of him, just pointed out one of the biggest reasons why government and politics has become so dysfunctional: a party primary system that forces Americans to divide against each other. Flake, Arizona’s junior senator, recently announced that he will not be seeking reelection in 2018. Many pundits have predictably leaped into a frenzied discussion of who is up, who is down, and all of the usual “politics as reality television show” that we’ve come to expect from them.

But if you listen closely to what Senator Flake is saying, you realize that his decision is not just a reflection of his dislike of President Trump. “Here’s the bottom line. The path that I would have to travel to get the Republican nomination is a path I’m not willing to take, and that I can’t in good conscience take,” Flake told the Arizona Republic in a telephone interview. “It would require me to believe in positions I don’t hold on such issues as trade and immigration and it would require me to condone behavior that I cannot condone.”

Flake feels he cannot win a Republican Primary without appealing to the small segment of party die-hards that turn out to vote in Arizona’s partisan primary system. Despite the media portrayal of a vigorous competition between Democratic and Republican candidates in races across the country, the Beltway crowd’s best kept secret is that primary elections, not November general elections, determine most electoral contests.

These primary contests, which often exclude independent voters, are increasingly controlled by the most die-hard party extremists. They also limit the choices of Democratic and Republican voters by forcing them to pick a party ballot and limiting their choices to candidates from one party. Primary candidates have no structural incentives to build inclusive coalitions or run campaigns that appeal to the diverse elements of the electorate.

In plain English, partisan primaries are set up to reward candidates who run narrow and divisive campaigns. When Senator Flake says that he’s not willing to travel the nomination path, what he’s effectively saying is that politicians who aren’t willing to give in to the most partisan vices of the extremists who dominate the primaries can no longer compete in American politics.

People are catching on, in no small part due to the contentious 2016 presidential primary, which excluded 25 million independents from participating. Ordinary citizens, from Florida to South Dakota are working to change the rules and enact open primaries so every voter can vote for any candidate, regardless of party, and candidates can appeal to the entire electorate. Open “top two” primaries, invented in Nebraska in the 1930s to deal with rising polarization, helped save California from political collapse earlier this decade.

Primary reform is being looked at seriously by diverse players, from the grassroots to the ivory tower. Most recently, 75 Florida voters showed up at public hearings convened by the Constitution Revision Commission to urge it to put a referendum for open primaries on the 2018 ballot. Right now, 3.5 million Florida voters are legally barred from voting in publicly funded primary elections. Harvard Business School also issued a report citing America’s political system as the “major barrier to solving nearly every important challenge our nation needs to address.” The report called for reform of the partisan primary system as a critical step towards restoring competition.

Senator Flake, welcome to the discussion. We value your input and welcome your contribution. Changing the current primary system from party-based to voter-based is going to require lots of heavy lifting.

Jason Olson is director of national organizing for Open Primaries, an organization working to open primaries in all 50 states. He helped pass California’s “top two” open primary in 2010 and is the co-author of “A Quiet Revolution” detailing how it rescued the state from political dysfunction.