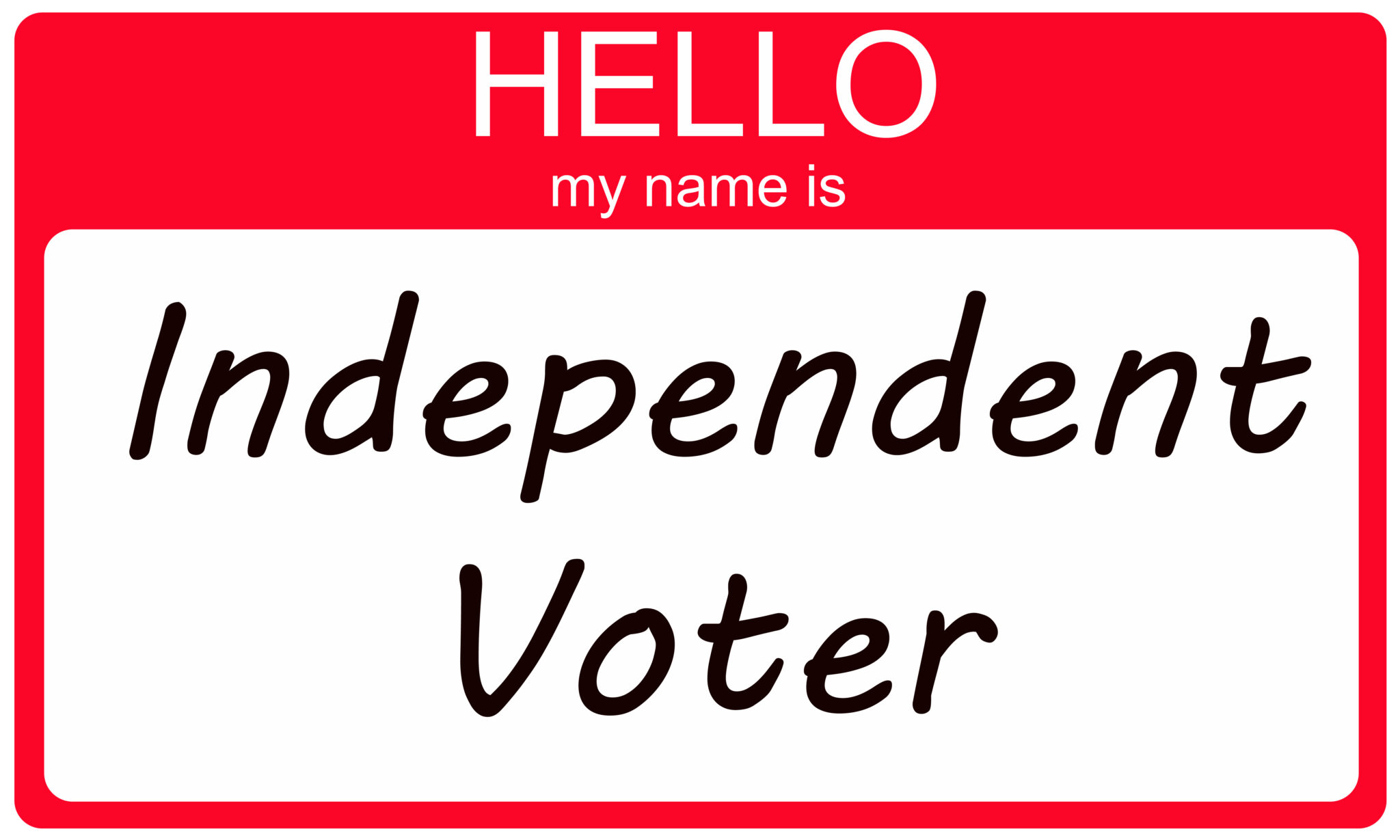 written by Bryan Metzger for New Mexico In Depth

When New Mexicans head to the polls during a general election, they usually have just two viable options: a Democrat or a Republican. There may be a Libertarian or unaffiliated candidate on the ballot, as well. Sometimes there may even be just one candidate on the ballot, as was the case in more than a quarter of the 112 state legislative races in the 2020 general election, all of whom represented a major political party.

Meanwhile, in the last 30 years, the number of independent voters has more than quadrupled, registering at just under 5% in 1990 and almost 22% in 2021. In three of the state’s counties–– Santa Fe, Taos, and McKinley–– independent voters actually outnumber Republican voters.

“I think the tipping point is that we’re seeing especially newly registered voters– and even some voters who are longtime active voters– have become jaded by the two party system,” said Heather Ferguson, executive director of Common Cause NM. “And they still want to be able to participate.”

Their growth as a share of the voting public potentially could dampen the highly partisan polarization Americans are experiencing today.

“The higher the proportion of independents, I think the more careful the candidates will have to be to avoid being perceived as overtly partisan,” prominent New Mexico pollster Brian Sanderoff told New Mexico In Depth during an interview last year. 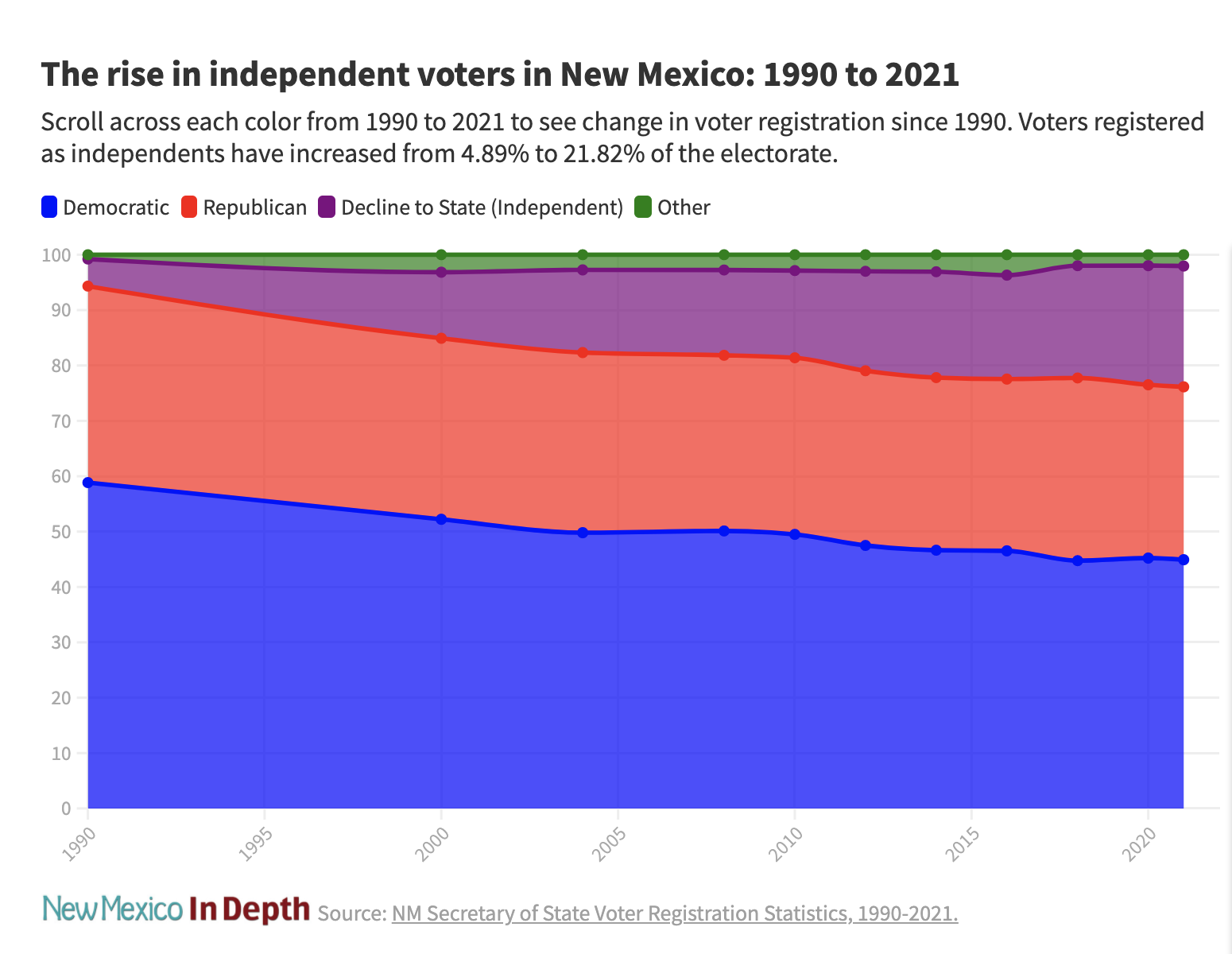 But the dramatic upswing in independent voters hasn’t, so far, translated to elected office. The only independent member in either legislative chamber is Rep. Phelps Anderson, who ran as a Republican in 2020 but this year jettisoned his party after voting to repeal a defunct 1969 state abortion ban.

When it comes to the ballot box, independent voters are unable to vote in primary elections–– often the only consequential election in deep-red or deep-blue districts–– and then must vote strategically during the general election if they want to avoid casting a “spoiler” vote.

And Democratic lawmakers in control of the Legislature have decisively shut down proposals this year to increase opportunities for independent voters to cast ballots, or choose candidates more aligned with their values without feeling like they threw away their vote, despite the growth of independents as a segment of New Mexico’s voting public and their lack of representation in elected office.

This session, three different ideas were floated that sought to address these issues, including ranked choice voting, a proposal to strengthen third parties by bringing “fusion voting” to New Mexico, and a long-standing push to open up major party primaries to independent and minor party-affiliated voters.

“All of these are really core issues to having a society in New Mexico that actually works, and provides an environment for thoughtful debate, for coalition building, for problem solving, and for pulling in a wide diversity of people,” said Bob Perls, a former state representative and the founder of New Mexico Open Elections.

Touting the successful implementation of a voting system in Santa Fe and Las Cruces that allows voters to rank their preferences on a ballot, rather than simply vote for one candidate, Common Cause New Mexico pushed to expand the system to elections across the state. If no candidate wins a majority of the vote at first, votes are re-tallied by eliminating the lowest vote-getting candidate and re-allocating their votes until one candidate achieves a majority. Last year, Alaska joined Maine and several cities across the country in adopting the practice.

“Before we decided to take it to the legislative session, at the state level, we needed to make sure that it was something that was in fact going to work for New Mexicans,” said Mario Jimenez, campaigns director for Common Cause New Mexico. “I think Santa Fe and Las Cruces prove that it does.”

“It helps tame the campaigning,” said Jimenez, explaining that candidates are incentivized to garner second-choice voters from individuals and thus will avoid attacking opponents.

But despite its use in two of New Mexico’s major cities, Common Cause was unable to find a sponsor for a bill to implement ranked choice voting in statewide primary elections, which was initially the focus of their effort. On Monday, Sen. Bill Tallman, D-Albuquerque presented a ranked choice voting measure to the Senate Rules Committee that would have asked voters to remove runoff elections from the constitution, to pave the way for a ranked choice voting law.

“I think it’s going to be very difficult to communicate to the voters on a constitutional amendment what this is really about,” said Sen. Jerry Ortiz y Pino, D-Albuquerque.

Lawmakers have also shut down a bill that would open primaries to independent voters.

Advocates for open primaries, which would allow independents and minor party-affiliated voters to participate in Democratic or Republican primary elections, argue that the current system shuts those voters out. It’s an effort with high profile support, but that didn’t sway lawmakers.

“There are many districts throughout the state where the only election is the primary election,” said New Mexico Secretary of State Maggie Toulouse Oliver in a House Judiciary Committee hearing on the bill. In 2020, 29 out of 112 state and house districts in the state saw just one candidate appear on the general election ballot.

Toulouse Oliver also argued that open primaries are not only good for increasing participation, but actually lighten the burden on election administrators.

“Inevitably, there are people who come to the polls who… are mistaken that they are not already registered with a major party,” she said.

Opponents of the measure frequently cite the fact that independent voters can easily change their registration ahead of a party primary, and that party nominees should be determined only by their own members. In response, advocates point to the fact that primary elections are funded by the state.

“[Opponents] seem to forget that it is a public election,” said Perls. “If they want it private, they need to pay for it.”

Rep. Matthew McQueen, D-Galisteo, argued against the measure, saying many independent voters may not be friendly to the Democratic party and may vote strategically for weaker candidates.

“They won’t necessarily vote for the candidate they want to win, or the candidate that they intend to vote for in the general election,” said McQueen, who cited an apparent example of this kind of crossover voting from the 2020 South Carolina Democratic primary.

But Perls sees this as a virtue, allowing for a kind of coalition-building that is not as possible with the current system.

“I can tell you, campaigning in a closed primary, you are in an echo chamber,” said Perls. “None of that is reflective of most unaffiliated voters.”

The bill, like the ranked choice voting bill, deadlocked with a 6-6 tie vote.

“It is officially in limbo,” said Rep. Gail Chasey, D-Albuquerque, chair of the House Judiciary Committee.

Another proposal would have made it easier for third parties to grow.

Fusion voting allows candidates to appear on the ballot as the candidate of both major and minor political parties and is used in New York, Connecticut, South Carolina, and five other states. The practice allows voters to select a candidate nominated by a minor party without fearing they are throwing away their vote. All votes for a particular candidate who appears on the ballot more than once would be combined.

“This is simply an effort to make it possible for minor parties to survive and to reflect the whole spectrum of political views that exist in our society,” Sen. Jerry Ortiz y Pino, the sponsor of SB 100, said to the Senate Rules Committee in early February. Ortiz y Pino, a long-serving Democratic state senator, sought last year to be nominated by both the Democratic party and the Working Families Party, a progressive minor party that recently registered in the state.

Ortiz y Pino argued that the two-party system left many feeling unrepresented, at one point noting that he once had more Green party voters than Republican voters in his downtown Albuquerque district.

Proponents of the measure also argued that it was a win-win, allowing for minor political parties to grow and play a greater role in the political process by coalition-building with larger parties, while protecting major parties from “spoiling” by minor parties.

“The history of fusion voting has been that minor parties really elevate an issue, and then a major party–because it becomes a part of their political coalition– has to take on that issue,” said Eric Griego, executive director of the New Mexico Working Families Party in an interview. “If you win your race by 5%, and you got 10% on the Working Families Party line, that tells you well, I’ve got to pay attention to what these guys are saying.”

However, the bill was ultimately tabled, with opponents arguing it was needlessly complicated. Ortiz y Pino expressed hope that the measure could be brought forth again in the future.