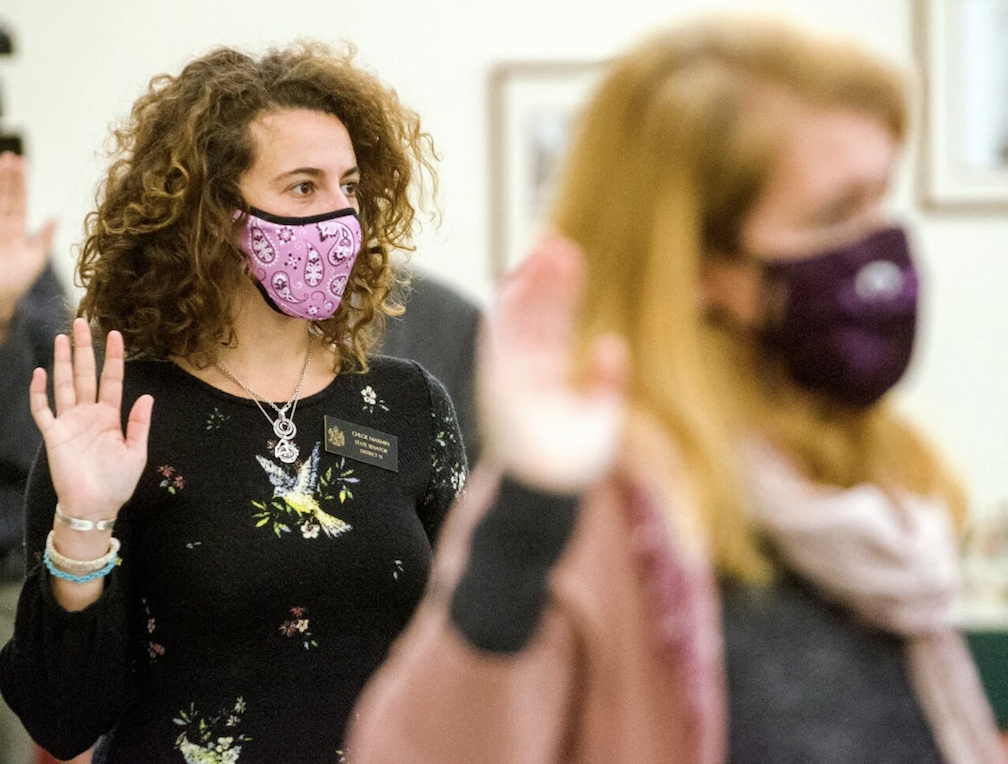 The bill is one of several that would increase voter participation in primaries or streamline the balloting process by rescheduling the newly created presidential primary from March to June.

Mainers who aren’t enrolled in a political party would be able to vote in party primaries under a bill that was heard by the Legislature’s Veterans and Legal Affairs Committee on Monday.

The “open primary” measure was one of several bills before the committee that would alter Maine’s elections.

“Countless unenrolled voters lamented on the campaign trail how they could not vote in a party primary,” said Sen. Chloe Maxmin, D-Nobleboro, sponsor of one of the bills. “Their taxes pay for these elections, but they cannot participate.”

Several others spoke in favor of the bill, and there was no testimony in opposition. Still, the measure faces an uncertain future in a Legislature with few members who are not enrolled in a party.

She said her bill would help depolarize politics in Maine by giving unenrolled voters more say in determining the final general election candidates. Maxmin, who says she has knocked on more than 20,000 doors during her legislative campaigns in recent years, said the sharp partisan divide in the United States and Maine is at the top of voters’ minds.

“The No. 1 thing that I have heard from people is a deep frustration with our political system that leaves our constituents feeling unheard, unrepresented and excluded,” she said.

Maine law only allows those enrolled in a political party to participate in that party’s primary election. Voters can register and join a party on an election day, but they must remain enrolled in a party for three months after joining.

Currently, 32 percent of Maine’s registered voters do not belong to a political party, according to the Secretary of State’s office. Democrats continue to hold the single largest voting bloc in Maine, with 35.6 percent of all registered voters, while Republicans make up 28.4 percent and Green Independent Party members representing 4 percent.

“Veterans are more affected by Maine’s closed primary laws than any other group,” said Alicia Barnes, an Augusta resident and a Navy veteran of the Iraq War. “Many of us have gone to war to protect our democratic ideals and yet here in Maine we are prohibited from fully participating in our democratic process.”

Nine states, including New Hampshire and Massachusetts, allow for broader participation in primaries, said Rep. Nicole Grohoski, D-Ellsworth, a co-sponsor of the bill. Maine is one of only 14 states with completely closed primaries, she added.

“Mainers are practical and appreciate common-sense solutions to problems that need not exist,” Grohoski said. “For a state that values and takes pride in our voter participation, it’s clear we can do better.”

Implementing a semi-open primary system in Maine would reduce some election costs but increase others, said Secretary of State Shenna Bellows and Patti Dubois, who represents the Maine Town and City Clerks Association.

Bellows, who testified neither for nor against the bills, said an open primary would increase ballot printing costs and require the state to spend $10,000 to reprogram the software for its central voter registration system, which tracks voter enrollment and participation.

“This double check-in slowed down the voting process and resulted in longer waiting times for many voters,” Dubois said. “These long wait times may have actually resulted in voters being disenfranchised if they were unable to wait.”

Other bills before the committee would not only allow unenrolled voters to participate in party primaries but also streamline voting in general by creating a single primary ballot. Another bill would move the newly created March presidential primary to June so it aligns with primary voting for congressional candidates, governor and the Legislature.

Moving the state’s presidential primary from March to June would cut election costs for the state and local election officials by eliminating the expense of another election every four years, Bellows said.

But changing the date to June also could reduce Maine’s influence in the presidential election cycle because its primary election would come after many other states in the U.S., she noted.

In the weeks ahead, the committee will decide how to combine the bills before it votes to either recommend passage or defeat of the measures by the full Legislature.