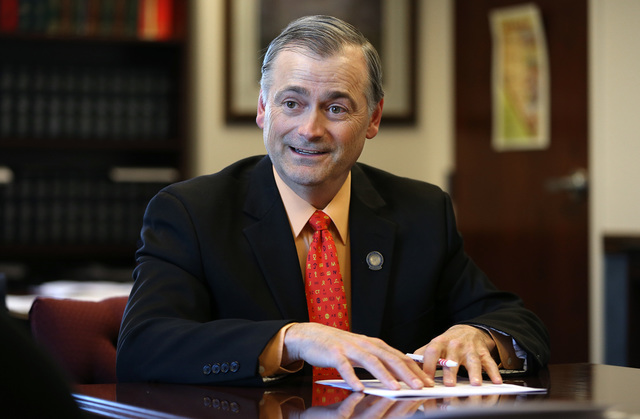 CARSON CITY — State Sen. James Settelmeyer introduced a bill Tuesday seeking to open Nevada primaries to all candidates and voters, not just those registered as Republican or Democrat.

Senate Bill 103 is a do-over of sorts of a bill the Minden Republican brought in 2015 to create open primaries. But the final version of that bill had a way different outcome: Instead of allowing more voters to cast a vote, it denied tens of thousands an opportunity to vote for some races in the general election if the outcome was decided in the primary.

“Some constituents were upset by not being able to vote for candidates,” Settelmeyer said. “This offers another alternative.”

The bill would create a modified blanket primary system for partisan offices, where all candidates — not just those affiliated with a major political party — are on the ballot. The two candidates who receive the most votes would advance to the general election, regardless of party.

Under Settelmeyer’s 2015 bill, the top two vote-getters who were not of the same political affiliation would have advanced. But the version signed into law instead changed decades-old election law governing how contests are decided when the only candidates are all Democrats or all Republicans.

Previously, if there were only two contenders from the same party, candidates would bypass the primary — where voters have to be registered with that party to participate — and advance to the general election when all voters regardless of affiliation cast a ballot. If there were three or more, the top two finishers advanced to the general.

Under the existing law, if a race draws candidates from only one party, the person who gets the most votes in the closed primary is the de facto winner of the general election.