Advocates: close to 3.2 million voters will not be able to cast their vote on primary Tuesday. 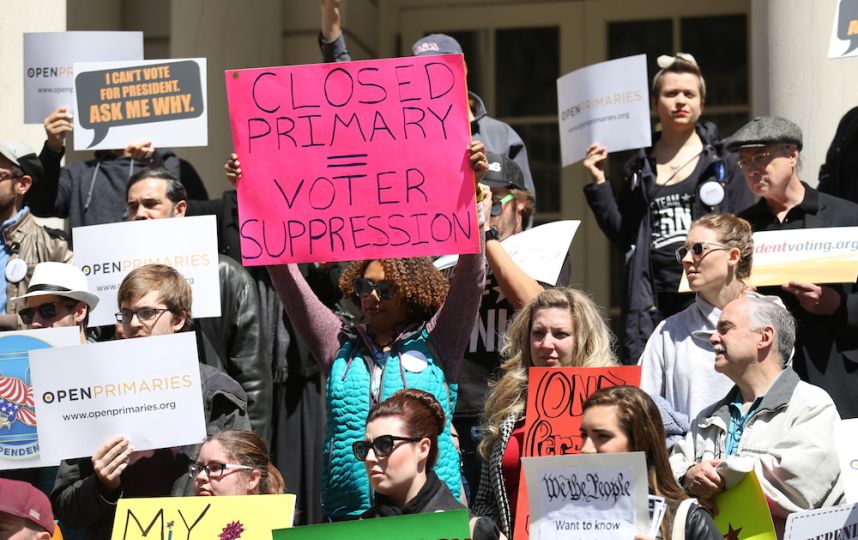 With less than a week before the New York primaries, over a hundred New Yorkers took to the steps of City Hall to call on a change in the state’s election system that would allow all voters to have their voices heard — no matter what party they belong to.

Independent voters and advocates of open primaries gathered on Thursday afternoon to shine light on the issue of the state’s current closed primaries system which will exclude, they argue close to 3.2 million voters in the state from casting their vote during next week's New York state primary.

In New York, only voters who had previously registered under the Democratic or Republican parties will be allowed to vote in the upcoming presidential primary — leaving out independent, third-party and unaffiliated voters.

Any independent voters who had wanted to vote in the primary would have had to register with a different political party by Oct. 9 of last year — something advocates say most people were not aware of. The issue ironically made headlines this week after two of Donald Trump's children complained about missing the deadline to vote for their dad in Tuesday's GOP primary.

“Putting gridlock and partisanship and wrapping it up in a bow and calling it stability is a lie and it’s a deception and the American people know it,” said John Opdycke, president of Open Primaries. “Reform must begin with the people, that is our message, that is our vision. We are not a flash in the pan, we are not going away.”

According to officials, in New York City 37 percent of all voters under the age of 30 are independent, this includes 22 percent of African-American voters, 32 percent of Hispanic voters and 40 percent of Asian voters.

Earlier this month, City Comptroller Scott Stringer released a report analyzing voting data over the last 60 years and found that voter turnout in New York had reach an all-time low during the last election.

As part of the report, Stringer pointed out changes that could be made to ensure more voters come out to the polls – such as allowing voters to register on Election Day.

Assemblyman Fred Thiele, an independent who has advocated for opening the state’s primary election process, also has introduced legislation that would allow independent or unaffiliated voters on Election Day to choose the party they want to vote for and cast their vote.

And although Thiele added that the bills won’t be passed in time for the Tuesday election, his goal is to make this year the last for closed primaries.

“We start today. The nation is looking at New York because it’s the first time in many years we have a competitive primary,” Thiele said. “We are going to seize this moment to begin the open primary process in New York.”

For NYU student AliAkbar M. Hassonjee, who is registered as an independent, one of the big group of voters being affected include millennials — many of which are registering under the independent or third parties.

“It’s time for generations to stop taking shot at each other, it’s time for politicians to realize that they risk alienating an entire population of voters if they refuse to give us an equal seat,” Hassonjee said.

And although Thursday’s rally was highlighting the issues with the current election, advocates said that this is movement that will continue to grow and speak out until necessary changes are made not only in New York State but also nationwide.

“We’re here today because we want to talk about who this political system belongs to, whether it belongs to the parties or to the people,” said Jacqueline Salit, president ofIndependentVoting.org.