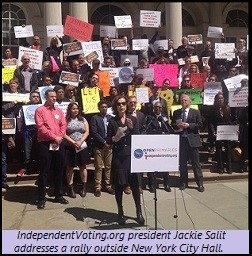 This article was written by Josh Russell for Courthousenews.com.

MANHATTAN (CN) — About 150 voters rallied outside City Hall on Thursday in protest of the system that lets only Democrats and Republicans vote for those parties' candidates next week.
New York has what is known as a closed primary system, but protest organizers say its rules disenfranchise 1 in 4 voters, about 3.2 million New Yorkers, who are not registered with the two major parties.
Independents supporting Sen. Bernie Sanders were particularly visible in the group Wednesday that chanted, "What Do Want? Open Primaries! When Do We Want Them? Now!"
There was undertone of anger and frustration throughout the event, and a couple more impatient protestors occasionally responded "Yesterday!" to the second question.
About a block from the Brooklyn Bridge, the rally began with an introduction by Jeremy Gruber, senior vice president of the nonprofit Open Primaries, who said this year's race is "the most important election of a generation."
With his fist raise toward the noon sun, Gruber got the protestors worked up with his call for New York lawmakers to "let all voters vote!"
The sign-holding protesters chanted the words back at him. "Let all voters vote! Let all voters vote!"
Other chants included "We demand the vote!" and "One person, one vote!"
Jackie Salit, the president of IndependentVoting.org, referred to this moment of voting dysfunction as "shining a light on the state of American democracy."
Salit said several times that "this is an issue whose time has come."
Harlem lawyer and longtime civil rights activist Alvaader Frazier, of the New York City Independence Clubs, spoke directly in favor of she called the Sanders "campaign for political revolution."
Frazier repeatedly cited figures of independent voters, which hovered around one-third of each population she mentioned. Event organizers handed out printouts of a March 2016 article from the website Black Star News, penned by Frazier and David Belmont, titled "Democracy? So Why Can't We Vote For Bernie Sanders?"
Saluting the Independent U.S. senator from Vermont for "giving Hillary Clinton a hard fought primary," the article says "Independents are on the front line for him." The rally came hours before Sanders and Clinton met in Brooklyn for a hotly anticipated debate.
Signs waved by the protesters included "I Can't Vote for President. Ask Me Why," "Closed Primary = Voter Suppression," "Make Voting Easier" and "Independent Voters: First-Class Taxpayers, Second-Class Voters"
One man's handmade sign read: "This is embarrassing. If Texas can have open primaries, so can New York." The reverse declared, "PASS A9661."
Assemblyman Fred Thiele proposed A9661 to open the presidential primary. 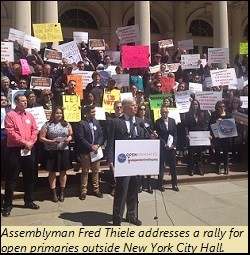 Thiele, a Long Island Independent, was the only speaker Thursday who has a plan for opening New York's primaries with his A9661 bill, yet he elicited boos from his supporters when admitted that "we're not going to have it on Tuesday," when voters hit the polls.
A former Republican, Thiele came across as strongly determined to change what he considers to be "most archaic voting laws" in the country.
Thiele blamed "laws [that] are skewed against independents" as a reason why "you're seeing depressed turnouts at elections," referring to New York's record-low voter turnouts in recent elections.
Earlier this month, New York City Comptroller Scott Stringer released a report that found New York had "one of the lowest rates in the nation" in the November 2014 general election."
"In New York City, only 25 percent of registered voters turned out - the lowest rate on record and a continuation of a decades-long slide," the report found.
Despite nationwide enthusiasm for then-Sen. Barack Obama in 2008, New York City had lower voter turnout that election season than any other major U.S. city, the city's campaign finance board later found.
Salit concluded the press conference declaring the open primaries issue "a genie that will not go back in the bottle."
Thursday's noon press conference outside New York's City hall was sponsored by IndependentVoting.org, the New York City Independence Clubs and Open Primaries.