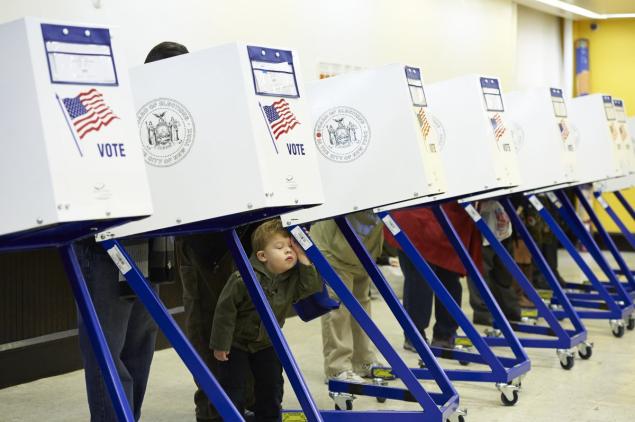 This article was written by Erin Durkin for the NY Daily News.

New York State has a closed primary, which means only people registered with a party can vote in that party's race. Voters are prohibited from crossing party lines.

The state has a closed primary, only allowing people registered with a particular party to cast ballots in that party’s race. Voters can’t cross party lines — and independent unenrolled voters can’t vote in any primary.

That leaves 3.2 million people in New York State, and nearly a million in the city, unable to vote in next week’s contest, according to the group Open Primaries, which rallied with others Thursday at City Hall.

“Independent voters are shut out and everyone else was forced to pick which primary they wanted to vote in six months ago,” said John Opdycke, president of Open Primaries, referring to the deadline to register with a party. “The political rules keep the voters powerless.”

Some other states use an open primary system, where voters can choose which primary to take part in.

Ankit Negi commented 2019-11-13 23:00:41 -0500 · Flag
This is really nice. I would like to thank you for the information in this article you gave to us. If Someone looking for help for your programming assignment? No-hassle our expert will help you to provide the Programming Assignment Help.
https://www.allassignmenthelp.com/programming-language-assignment-help.html

Ria Singh commented 2017-01-11 06:59:44 -0500 · Flag
We Provides You Finest Bangalore Escorts Companion.Bangalore Independent escorts , the one stop place for all your desires and needs one in exceptionally exotic, enticing and hot developments which will make you desire for additional service.
http://www.haveme.in

Roshani Khanna commented 2016-10-17 07:31:22 -0400 · Flag
If you want to take much from this paragraph then you have to apply these techniques to your own web site.
http://www.aerocityescortservices.in
http://www.delhigurgaon.in
http://www.yamigupta.in

Roshani Khanna commented 2016-10-01 06:14:40 -0400 · Flag
I am very happy with the content of your article it is very beneficial and I wait for the next article to update the information again. http://www.roshanikhanna.in