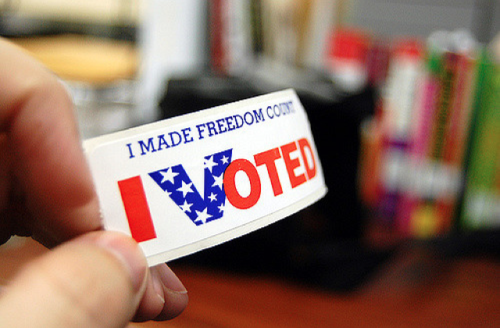 This article was written by Rafaella Gunz for TheAntithesistns.com.

April 19th marks New York’s presidential primary and voting is meant to be a democratic process, many voters are facing bureaucratic restrictions before they even make it to the polls.

Each state gets to decide how they want to run their primaries and New York has a closed primary, meaning only those registered as either a Republican or Democrat can vote. The deadline for new voters to register was March 25th, but if you were registered as an Independent or unaffiliated with a party, the deadline to change your party affiliation was last year on October 9th.

“I was previously registered as an Independent,” says Mary Joan Smith, a 61-year-old from Phoenix, New York. “I had not made up my mind who I was voting for until after the October 9th deadline to change party affiliation.” She mentioned this was also the case for at least five other people she knows. Now, Smith and her friends all want to register as Democrats to vote for Bernie Sanders but won’t be able to.

Smith, who moved before the March 25th deadline, was able to change her address on her registration but was unsuccessful in changing her party. “I changed my party affiliation to Democrat,” she states. “Unfortunately, when my voter registration card arrived, it still listed me as unaffiliated, which will prevent me from voting in the primary on the 19th.”

“When I called the Board of Elections I was told that even though I changed my party when I submitted the change of address, because I was not a brand new voter, I could not vote as a Democrat,” says Smith.

Regina Hill, another New York voter, had a similar dilemma. “I changed my party affiliation from Unaffiliated to Democratic party before the new voter deadline of March 25 in NY so I could vote in the primary,” she says. “However I’m being told that because of a phenomenon and a law that was put into effect before women were even given the right to vote that I cannot vote in the NY primary.” Here, Hill is citing a state law that’s been in effect since 1917 to prevent “party raiding,” where a group of people will switch parties to manipulate the outcome of primaries.

“I feel disenfranchised and cannot believe that this is how a citizen is treated in a democratic society” Hill says. “My vote will not count in one of the most important elections of our time.”

Jeremy Gruber of the organization Open Primaries mentions that 3.2 million voters in New York State are registered as Independents or unaffiliated with a party. This is a large group of people who won’t be able to have a say in the upcoming primary, which Gruber argues is often the most important election.

“Despite New York being seen as a progressive state, it has one of the most restrictive primary laws in the country,” Gruber says.

On April 14th, Open Primaries hosted a protest at New York’s City Hall in order to bring awareness to this issue. The organization also created an open letter to New York Senator Chuck Schumer, which any supporter can sign. In addition, there is currently a bill in the New York State Assembly regarding the primary system which citizens can sign to support as well.

“We want this to be the last undemocratic primary,” Gruber states.