Something is Going Seriously Wrong with New York Voter Registrations

This article was written by Rosette Newcomb for U.S. Uncut.

New York’s Democratic primary is starting to look an awful lot like the Arizona primary.

Hundreds of voters, most of them registered with the Democratic Party, are filing a class-action lawsuit against the New York State Board of Elections on Monday morning, claiming their voter registration was changed to “independent” or “no affiliation” without their consent.

In closed primary states like New York, voters who are not registered as Democrats or Republicans can’t vote in those primaries. Voters identifying as independents wishing to vote in the Democratic primary had to change their registration to Democrat by October of 2015 — the earliest registration deadline in the country.

This is almost exactly what happened in Arizona, when voters who had been eager to vote in the Democratic primary learned upon arrival to their designated polling place that their registration had been changed, making them ineligible to vote. In conducting their own investigation of what exactly happened in Arizona, hacktivist collective Anonymous discovered that Arizona kept voter information on an SQL database, which is so easy to hack a 3-year-old can do it. In fact, a white hat hacker discovered a database of 191 million voter registrations last year, which may mean that other, more nefarious hackers have accessed that information as well.

At a public hearing over the multiple irregularities at the Arizona primary, Arizona Secretary of State Michele Reagan publicly stated that party affiliation for many voters was changed at the last minute, and she has yet to find out how or why. The Justice Department has begun an official investigation, and the Democratic National Committee, along with the Hillary Clinton and Bernie Sanders campaigns, have sued the state of Arizona over alleged voter suppression.

New York voters angry about the mysterious change in their party affiliation have taken to a Facebook group titled “Voters whose registration was changed without their knowledge in NY” to share their horror stories. Shelly Berry discovered that someone had changed her voter registration in 2012, even forging her signature on the document: 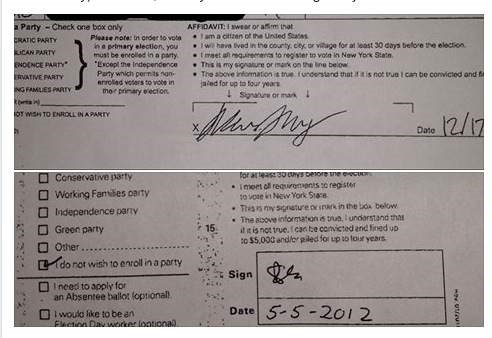 Today I went to the board of elections to find out why my voter registration was switched from democrat to unaffiliated without my knowledge or consent. The man there said I had applied to be changed to no party affiliation in 2012. I said that was absolutely false and never sent in such a form. I had him print the 2012 form and then had him print two additional forms, two which I know I filled out myself. Both forms I filled out myself had “democrat” checked. The one from 2012 is a FRAUDULENT form which is NOT in my handwriting and has a forged, completely wrong looking signature on it.

Philip Kathrens, another member of the group, said state election officials mistakenly selected “Democratic” for his party affiliation. Since Kathrens wanted to vote in the 2016 Democratic primary, he assumed his registration was still with the Democratic Party, but recently found out his registration was changed to “Other” without his knowledge: 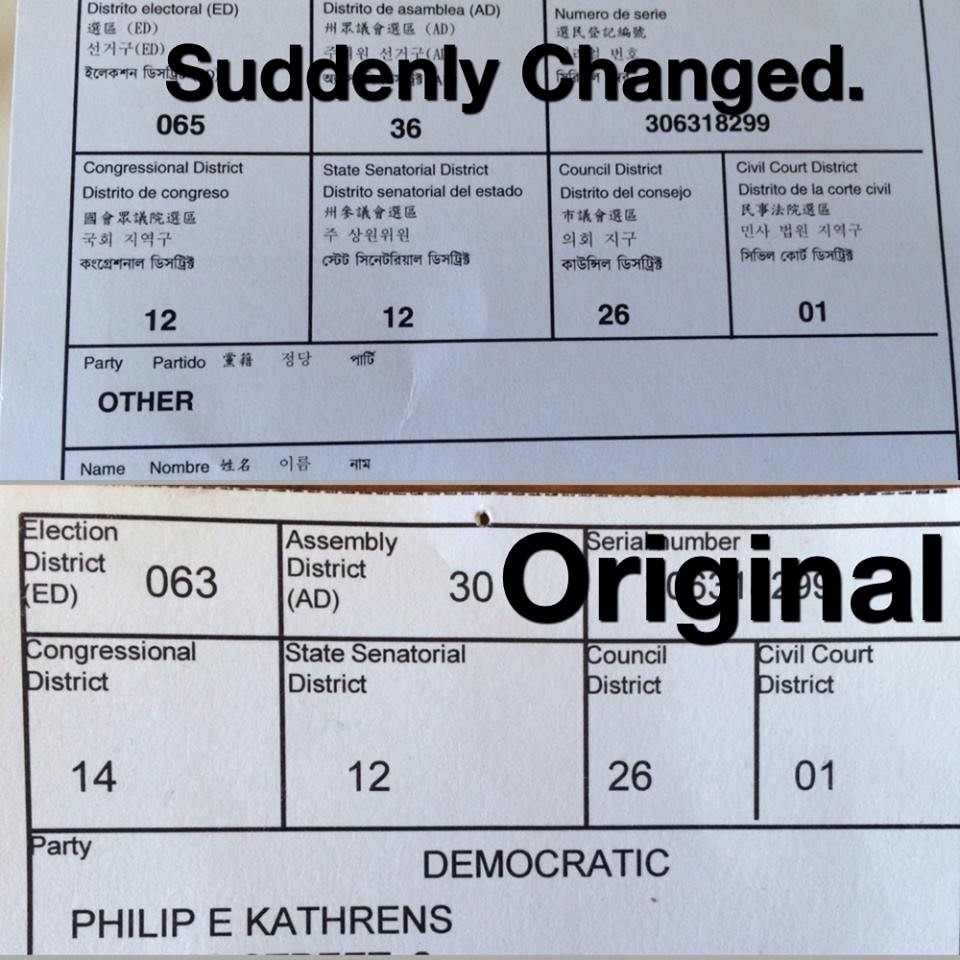 I originally selected “socialist” on my registration in 2012. When my card came I was pissed that they had placed me in the “Democratic” party. This is why I know I was registered as a democrat. I never changed it, figuring that they only placed people in 1 of the 2 parties. Flash forward to a month ago, I started hearing about the things going on and double checked my registration. Suddenly it was “Other”.

The party affiliation barrier these voters are struggling with will undoubtedly play a role in the New York primary on Tuesday. Some advocates are calling for New York to open its primary to independent voters to avoid disenfranchising thousands of voters.

Over 7,000 people have signed a petition calling on U.S. Senator Chuck Schumer (D-NY) to urge the New York Democratic Party to open its primary up to independent voters. Schumer himself wrote an op-ed in the New York Times calling for primary reform in 2014.

“If the primary were open, this would be a non-issue for thousands of registered voters that have had this happen to them,” said Shyla Nelson, spokeswoman for Election Justice U.S.A. in an interview with the New York Daily News. “By making the primary open, it eliminates one of the most vexing problems New Yorkers have dealt with in this primary season.”

Rosette Newcomb is a political science graduate from the City University of New York. She covers the 2016 election and social movements for US Uncut. She lives in Queens. Contact her at [email protected]