This article was written by Edmund Kozak for Lifezette. 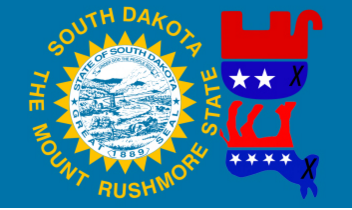 Inspired by Nebraska, which has had a nonpartisan, unicameral legislature since 1937, proponents of the initiative believe it will compel voters to look closer at candidates’ records and beliefs and lead eventually to greater cooperation among state legislators unbeholden to partisan loyalties, or Establishment influence.

In addition to Nebraska, California and Washington also have top-two open primaries for congressional and state elections. Previous efforts to establish such primaries in Arizona, Maryland and Oregon failed.

If the South Dakota initiative is successful, the move could inspire similar efforts in other states. Apart from South Dakota and Nebraska, another 16 states allow for popularly-initiated constitutional amendments.

Eradicating party labels from elections in those states would send a terrifying and deafeningly loud message to the party Establishments — indeed it could be the death knell for the power party elites enjoy under the current system in those states.

Public trust in government has fallen consistently over the past eight years, and more Americans now identify politically as independents. In 2008, around 30 percent of Americans

This widespread disillusionment with business-as-usual in politics has fueled the campaigns of outsider candidates Trump and Sanders. Trump’s unabashed populist bent is splintering the GOP into at least three camps, but also drawing huge hosts of new voters into the GOP primary process. At the same time Sanders’ shameless socialist message is appealing to young whites, increasingly isolated from the rest of the Democratic party. believed government was run for the benefit of all – that number dropped to less than 20 percent by 2015.

The outsider campaigns are forcing the GOP and Democratic Establishments to come to terms with the fact that they must change in order to keep voters’ interests, let alone loyalty, though some members no doubt cling to the hope that once Trump, Sanders and their rabble rousing are a mere memory, so too will be the anti-Establishment anger which propelled their campaigns.

The South Dakota ballot initiative shows the anti-Establishment, anti-partisan movement can have permanent implications, despite those hopes from party elites.