What If the Parties Didn't Run Primaries? - Open Primaries

What If the Parties Didn't Run Primaries?

What If the Parties Didn't Run Primaries?

By Russell Berman for The Atlantic. 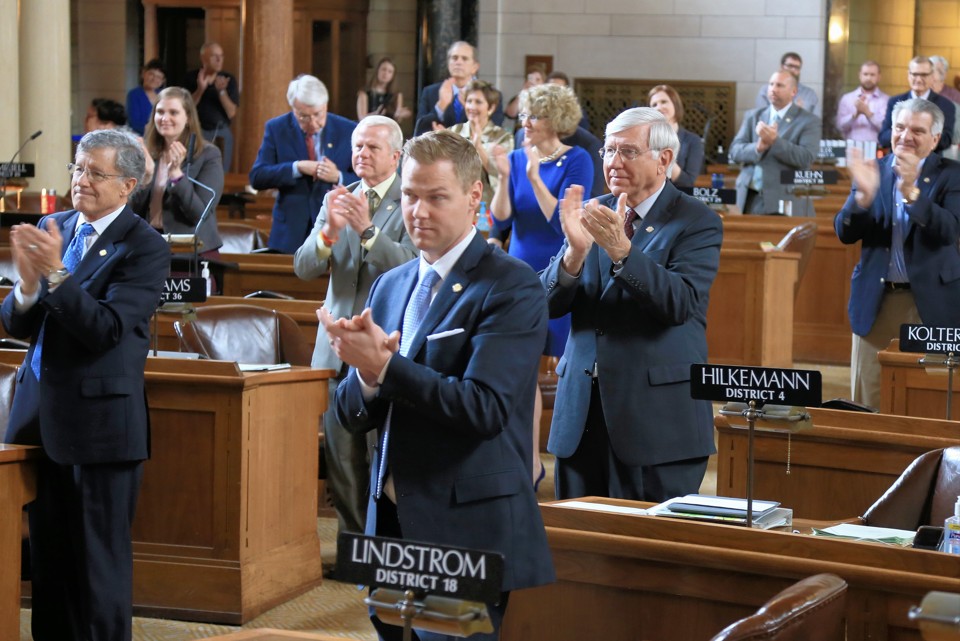 October 19, 2015—In the last year, the state legislature in Nebraska has voted to abolish the death penalty, raise the gas tax, and give driver’s licenses to undocumented immigrants youth—actions that each required lawmakers in one of the nation’s most conservative states to override the veto of a new Republican governor.

That flurry of ostensibly liberal victories didn’t come about because of an electoral earthquake at the polls. It occurred in large part because Nebraska’s legislature is run differently than any state in the country. Since 1934, the unicameral chamber has been officially nonpartisan, and so are the elections that form it: Primary contests determine the top two candidates, who then face off in a general election regardless of party identification.

The top-two open primary—sometimes known as a jungle primary—is also a feature of elections in Washington state and California, where voters adopted it through a ballot initiative for all state and federal contests except president. Now a group of advocates based in New York is campaigning to take that system nationwide, arguing that it would make elections more competitive and empower the rising number of independent voters disenchanted with the two major parties.

The push is, first and foremost, an attack on the party system, which the advocates say has abused its gatekeeper role in politics and led to the gridlock and hyper-partisanship so often on display in Congress. “The problem isn’t the money. The problem is the parties themselves,” John Opdycke, the president of Open Primaries, told me in a recent interview. A veteran election-reform activist, Opdycke has been pushing for nonpartisan primaries as part of a succession of different advocacy groups for more than a decade. He worked on former Mayor Michael Bloomberg’s campaign to implement nonpartisan elections in New York at the beginning of his tenure, which by Opdycke’s own telling was a spectacular failure. “We got crushed,” he conceded.

Yet with California and Nebraska serving as successful state-level models, and with independent voters steadily increasing as a share of the electorate, Opdycke says he sees at least the early signs of momentum. The effort won a key endorsement last year from Senator Charles Schumer, the likely next Democratic leader in the Senate, who along with just about every party leader in New York opposed the change when Bloomberg pushed for it in 2003. And Open Primaries is now working with state activists to enact nonpartisan elections through 2016 ballot initiatives in Arizona and South Dakota.

The idea behind the top-two system is that in thousands of congressional and state legislative races across the country, partisan gerrymandering has made the traditional general election between a Republican and a Democrat non-competitive. In many races, incumbents run unopposed, and if they aren’t, the only competitive elections are the party primaries, which in most states are closed to independent voters. Some states have primaries in which independents can vote (in one party or the other), but the Supreme Court has ruled that the government can’t force a political party to open up its primary, so advocates instead are pushing for the creation of nonpartisan elections outside of party control. This would allow millions more people who aren’t registered as Republicans or Democrats to participate at the earliest stages of the election, which Opdycke argues is often the most important part of the process. Primaries, he said, “don’t just determine party nominees. They determine the shape and the tenor and tone of the campaign, the issues that are on the table, the coalitions that are on the table.”

In California, the shift to a top-two system in 2012 has meant that Republicans often face Republicans, and Democrats face Democrats, in general elections, which forces candidates to appeal beyond their party base. The result, according to a white paper by Open Primaries, is more competitive races, higher voter participation, and a more “functional legislature” that works more on coalition-building than party loyalty. The system has also produced some anomalies, such as in 2012, when Democrats failed to get a candidate into a general election for a competitive House district, missing a key opportunity to pick up a seat from Republicans. And the change hasn’t helped independent candidates as much, since they now must compete in the primary instead of skipping to the general election.

Part of the challenge for Open Primaries is that at a time when complaints about the U.S. political system run rampant, the market for election reform proposals is quite crowded. There are campaigns to root out the corrupting influence of big money in politics; to push for automatic voter registration; to fight against voter ID laws (and for increased access to the polls); and to eliminate gerrymandering through independent redistricting commissions. And that’s just to name a few.

Which is the best tactical fight? Opdycke and his colleagues say they obviously need to build coalitions with other good-government organizations, but he’s also frank in arguing that targeting money in politics is foolhardy—a message that’s unlikely to win over campaign-finance reformers. “From a purely practical, tactical viewpoint, efforts to reduce the impact of big money by regulating big money have not been successful, and that’s a 30-year track record,” Opdycke said. “It just hasn’t worked.”“Rather than focus on further regulating big money,” he continued, “we should focus on further empowering the American people, giving the American more access, more power, more ability to impact and make their voices heard.”

Progressive reform groups like Public Citizen and Demos haven’t taken a position on the question of top-two primaries. But they’re understandably sensitive to the suggestion that after the Supreme Court ruling in Citizens United, they should simply give up their push to overhaul campaign-finance laws. “I don’t think any election reform should be instead of any money-in-politics reform,” said Lisa Gilbert, the director of Public Citizen’s CongressWatch. “I think they’re two sides of the same coin.” Liz Kennedy, a lawyer and campaign strategist for Demos, added with a laugh: “I certainly don’t think we need to increase the divides among the small community of pro-democracy reformers.”

Open Primaries has another congressional ally in Representative John Delaney of Maryland, an entrepreneur-turned-politician elected to the House as a business-friendly Democrat. Delaney has introduced the Open Our Democracy Act, which would mandate the top-two, nonpartisan primary system for congressional elections across the country, as well as make Election Day a federal holiday. But the bill has just three other co-sponsors, all Democrats, and even Delaney says the push for independent redistricting panels to combat gerrymandering would be a more achievable election reform in the short run. “Obviously the two things working in combination is even better, but right now what we need is one or the other,” he told me. Redistricting reform, Delaney said, is “easier for voters to get their heads around.”

A development that could give activists like Opdycke more hope is the increasing success that non-politicians—whether Republican, Democrat, or independent—have had in winning elections on the state and federal level. For obvious reasons, they carry less loyalty to the party system and are more open to change. “Among career politicians, there’s hesitancy because they’re used to the system the way it is, and they like to operate within the system,” Delaney said.

Brad Ashford, a House Democrat in his first term, is a career politician of sorts, but not the kind that Delaney is talking about. He was one of just two Democrats to defeat Republican incumbents in the 2014 election, having ousted Representative Lee Terry for the seat representing Omaha, which happens to be Nebraska’s only competitive congressional district. Over a quarter century in the Nebraska legislature, he’d won elections while identifying as a Republican, a Democrat, and an independent. (He also lost a 2013 bid to be mayor of Omaha running as an independent.)

Arriving in Washington after the November election, the 65-year-old Ashford described the culture shock of discovering that everything in the Capitol, from a ceremonial lunch for new members in Statuary Hall to the annual retreats, was divided by party. It was an experience he compared to “fraternity flag football.”

“You’re divided into teams,” he said. “The Democrats eat in one area and the Republicans eat in another. I can’t even imagine anything so silly. That builds party loyalty from day one, but it’s the exact opposite of what you’d want to have happen.”

Of course, Ashford was probably that surprised only because he was coming from Nebraska, where party labels mean much less. Even though registered Republicans comprise most of the legislature, Democrats are frequently chosen in secret elections to serve as committee chairmen, and moderate Republicans tend to be elected speaker. “It’s a night-and-day difference,” Ashford said. "Our system is relationship-based, not party-based.”

Vince Powers, chairman of the state Democratic Party, told me there’s “no question” that if Nebraska had a typical partisan-election system, the legislature could not have passed the bills abolishing the death penalty or granting driver’s licenses to DREAMer immigrants. “They are very into the nonpartisan nature of it,” he said of the legislators. “The state senators take a lot of pride in it.” That being said, there are frequent efforts by conservatives to change the system first devised in the 1930s by George Norris, a “New Deal Republican” who was featured a generation later by John F. Kennedy in Profiles in Courage.

Republicans haven’t tried to overturn the entire system, but they have pushed, without success, to make the elections for committee chairmen public in the interest of transparency. That has put supporters of the status quo in the position of defending secrecy and opening themselves to charges that the legislature of Nebraska, while uniquely productive, gets its work done because of the kind of clubby, “back-room deals” that can generate public outrage. (It was, after all, the “Cornhusker Kickback” that nearly derailed Obamacare in Congress after Democrats negotiated an exemption to secure Nebraska Senator Ben Nelson’s support.)

The relationship-driven, nonpartisan nature of the Nebraska legislature serves as insolation from outside political pressure, for better or worse. “At times there’s satisfaction with the way it functions, and I think at times there’s frustration with the way it functions,” said Bud Synhorst, the executive director of the state Republican Party. There are also times when legislation seems to move too quickly in Nebraska, especially since there’s no second chamber to serve as a check on the unicameral Senate. Powers said he likes to remind people, “We were the first state in America to ratify the Equal Rights Amendment. We were also the first state in American to rescind our ratification.”

Ashford said he’d want to see the Nebraska system for elections replicated nationwide, but Powers, the Democratic chairman, wasn’t so sure. “It just doesn’t seem realistic,” he told me. “It works very well in Nebraska, but it’s a tradition.” Perhaps it’s not surprising to hear a party chief sound a skeptical note about a proposal aimed at diminishing the power of the parties. (The national parties don’t seem concerned; neither would comment on the idea.)

Both Powers and Synhorst made clear that it wasn’t as if Democrats and Republicans had been entirely neutralized in the Cornhusker State. “I don’t want to have this utopian view here,” Powers said. The parties still recruit and endorse candidates, and fight fiercely on certain issues. And declaring an election nonpartisan—whether in Nebraska or any other state—doesn’t make it so. “Politics isn’t going anywhere, right?” he said with a laugh. “I mean, it just isn’t.”