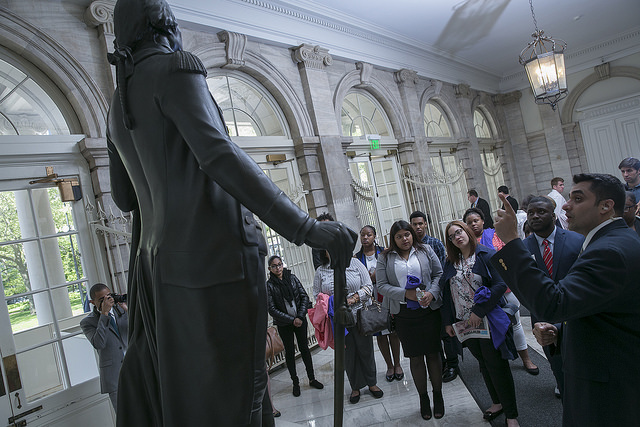 Open Primaries and Overcoming the Racial Divide the Parties Prop Up

Open Primaries and Overcoming the Racial Divide the Parties Prop Up

Today the dominance of the two major parties has frozen the country’s political development along a racial divide: the Republican Party uses law and order, tax cuts and anti-immigrant rhetoric to capture white voters, and the Democratic Party depends on high black voter turnout to win elections, while failing to address the ongoing inequality between people of color and white people. Pollster Cornell Belcher has found that 63% of black people feel taken for granted by the Democratic Party. The current highly partisan political environment is producing both government dysfunction and a general sense of dread that the county is moving backward.

The American people have been so manipulated and divided by politicians and our political process so over-determined by two-party control that for ordinary people of good will to meaningfully come together requires a wholesale break from politics as usual. We should not confuse multiracial solidarity—when people of different races come together to fight for a common goal—with the dynamic of political party constituency groups such as African-American, Latino, LGBT people, and women making demands within the Democratic Party and fighting each other for the attention and resources of the party and its elected officials.

I recently had a conversation with a close friend whose history is very different from my own. We agreed that perhaps the most dangerous effect of the current political environment is that people of different races are being pushed further and further apart. My friend Nancy, who is white, grew up under segregation in the 1950s in small towns all over northeast Arkansas. As a child, she "experienced and witnessed and joined the fight for integration in the South.” Fifty miles from her home and 20 years earlier, the Southern Tenant Farmers’ Union was formed, a federation of tenant farmers that united black and white sharecroppers to reform the system of sharecropping and improve the lives of all its members. Women played a key role in the development of this organization. As we talked about this, Nancy said to me, “I think this history is good to have in our tool box. I certainly will not forget where I come from. This history is important to me because I witnessed the fight for integration in the South.”

I grew up in the black community of south Philadelphia in the 1960s. My grandmother, Adell Chandler, owned and operated a large soul food restaurant that was open 24 hours a day and was a pillar of the cultural and social life of the community. She was a supporter of the civil rights movement and she encouraged me to become a doctor. I dreamed of becoming a doctor who could be a role model and help transform the conditions of the black poor.

I remember hearing Dr. King’s voice on the radio. It was his unbending stance for nonviolence, his courage, his willingness to sacrifice his life, his humble yet soaring commitment to fight against poverty, racism, and war that inspired people of all colors to take a stand. When Dr. King asked people to come to Selma to march for voting rights for African-Americans, Americans from across the country responded.

Nancy and I are both independents who are activists in the progressive wing of the independent political movement founded jointly by Dr. Lenora Fulani—who ran for president as an independent and in 1988 became the first woman and African-American to appear on the presidential ballot in all 50 states—and Jackie Salit, the author of Independents Rising and the president of Independent Voting, the country’s largest network of independent voter activists. These two women are working to build multiracial solidarity by creating independent tools to revitalize American democracy and transform our political culture to one of inclusion and opportunity for all.

Multiracial solidarity stretches throughout American history from the founding of the country in which black soldiers fought alongside white soldiers in the Revolutionary War, to the anti-slavery movement of black and white abolitionists who worked together and built the Underground Railroad. And examples from the Civil War, when Union officers like Thomas Wentworth Higginson and Robert Gould Shaw led regiments of black soldiers, many of whom were recently emancipated slaves (Shaw died fighting alongside his black troops).

A little-known demonstration that preceded the modern civil rights movement was led in January 1939 by Owen Whitfield, an African-American preacher and organizer of the Southern Tenant Farmer’s Union. He led the Missouri Sharecropper Roadside Demonstration, where black and white homeless sharecropping families camped out on the side of the road in the dead of winter as a means of getting the government’s attention to the vast poverty and injustice for tenants who were pushed off the land by planters. In the face of the segregated south they stayed together and though the public demonstration was crushed by the state police, it remains an inspiring example of poor people crossing the racial divide to stand in solidarity and demand justice.

Today in most states there is a political divide between the Democratic and Republican parties that corresponds to a racial divide in which people live in segregated communities.

A recent New York Times article on the obstacles to getting the governor, the mayor and the state Legislature to agree on a plan to invest in New York City's badly aging subway noted: "The future of the nation's busiest subway system, which has become engulfed in crisis, could well depend on New York State lawmakers…who live hundreds of miles from the city.”

In a closed primary state like New York, where party insiders control the process of voting, only party members are allowed to vote in the corresponding primaries. Over 3 million “independent” voters are excluded from primary voting as a result. Of those, 35% are millennial voters, 33% are Asian voters, 20% are Latino voters and 18% are African-American. Under these exclusionary, partisan elections, the New York State Legislature has proven itself to be one of the most dysfunctional and corrupt state governments in the country.

This November, New Yorkers will have an opportunity that only comes around every 20 years: to vote “yes” on a constitutional convention, through a ballot referendum question on Election Day, and break free of the constraints to begin a process that puts reforms such as open primaries in the New York State Constitution.

In contrast, California has nonpartisan open primaries, passed by the voters in 2010. The impact has been significant. People of color are winning some local elections in majority white districts and California is leading the nation in passing effective government reforms. Moreover, under its open system two women - one African-American and one Latino -- faced off in the general election for a U.S. Senate seat in 2016. Kamala Harris, the African-American of the two, won to become the junior senator from California.

Americans can only truly come together if we can build a democratic process that empowers all voters outside the framework of a political party. Nonpartisan structural reform such as open primaries provides that opportunity.

Forty-three percent of American voters now self-identify as independents and many people, no matter how they identify, want the chance to vote and to participate in politics in new ways. The government dysfunction we see in Washington will not be reformed from within the parties. The future of our democracy depends on the American people carrying it forward. Those stepping outside the parties are leading the way to build bridges rather than walls.

Dr. Jessie Fields is a Harlem based physician, an organizer with the New York City Independence Clubs and a board member of Open Primaries, which advocates for nonpartisan election reform.