Our Day in Court - Open Primaries

Our Day in Court

Two lawyers -- one from the Board of Elections and another from Attorney General Schneiderman’s office -- stood in defense of an electoral system that prohibits 3.2 million voters from participating in the most impactful round of voting.

The courtroom was overflowing with dozens of supporters of open primaries and independent voter rights; the security guards shepherded extra seats from the backroom throughout the trial; the judge made an exception and let spectators sit in the jury box after admitting that he had never seen so many people in his courtroom; and there were still twenty more activists standing in the corner. 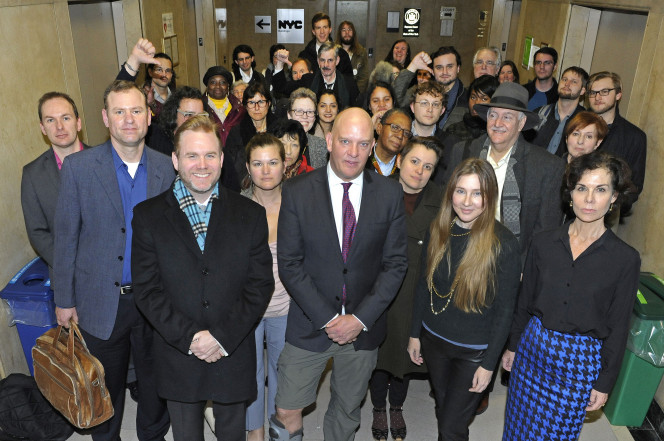 No one in the audience was there to support closed primaries.

After approximately an hour of legal debate, and fifteen minutes of deliberation, New York State Supreme Judge Arthur Engoron issued a ruling -- vested in prior decisions by the Supreme Court and circuit courts of other states -- that New York’s closed primary system and change of party affiliation deadline might be arcane, but they are not unconstitutional. He dismissed the challenge.

In other words, Judge Engeron admitted what we all already know, which is that the political establishment believes that party rights are more important than the rights of voters in New York State. The ruling was certainly not unexpected, and Mark is considering a challenge.

This was an important and positive step forward for our movement after an historically chaotic primary season in New York. We made ourselves heard loud and clear, by packing the courtroom and forcing the establishment to admit, on the record, that the rights of parties are paramount.

The road ahead for us certainly won’t be easy; the establishment of both parties -- who have far too much control over New York’s elections -- stand firmly in our way. But we will not be deterred until everyone in New York can vote in every election.

Thank you to everyone who came out and packed the courtroom and forced the New York State Supreme Court to acknowledge our movement yesterday.

Michael Jamieson commented 2016-12-22 22:53:09 -0500 · Flag
Unfortunately the judge is right. Each party is a closed members-only group of private citizens and, as long as they don’t discriminate against protected groups, the constitution is on their side. This is why I think what we need is an amendment to the constitution that establishes a single open national primary. The private-citizen political parties can continue to have their primaries (and pay for them themselves) to determine who their representative for the national primary will be, but the only one that would count would be the national primary. The amendment wouldn’t need to (but could) end the electoral college, because it only affects the primaries. This would also end the distortion to the electoral college brought on by having more than two candidates on most state’s ballots for president. There could only be two candidates left standing, ensuring that one or the other would get enough nominal or electoral college votes to win.