This article was written by Jake Blumgart for KnightBlog 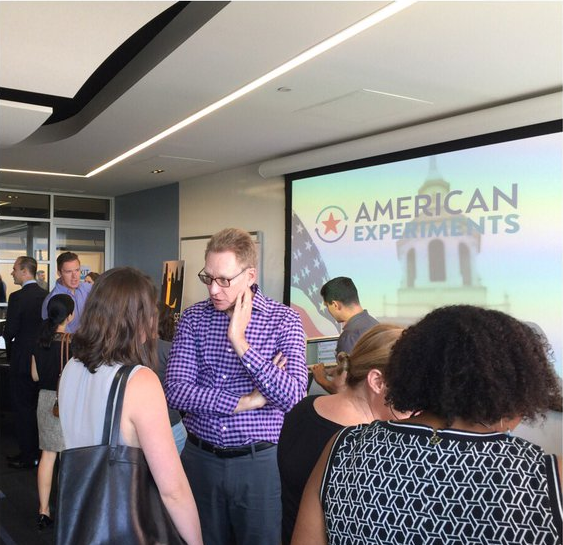 On the first day of the Democratic National Convention in Philadelphia, techies and activists packed into the University City Science Center’s Quorum space to advertise their wares for the “American Experiments” showcase. Sponsored by the nonpartisan watchdog group the Committee of Seventy, Microsoft, Technical.ly, and Knight Foundation—among many others—the event provided an opportunity to bring civic-minded tech to the masses of politically minded people who have descended on the city.

The 18 vendors attending American Experiments ranged from local organizations such as Code for Philly, the city’s Code for America brigade, to long-established national groups such as e.thePeople, which debuted in 1999. The air buzzed with talk of partisanship, disenfranchisement and low voter turnout as attendees were introduced to the tools that the participants hope to use to make our democracy more transparent and accessible.

Many of the vendors used the current presidential race to explain their tools in an easily understandable context. But many of these innovative apps seemed better suited to off-year elections, when voters are less likely to be informed about the candidates and less likely to vote. (In 2014 43 percent of registered voters cast a ballot—the lowest turnout in 72 years—while in 2012 the number was 67 percent.)

The California-based for-profit company Crowdpac, for example, bills itself as a kind of Kickstarter for candidates. Political neophytes can test the waters and try to secure enough money to run on before deciding whether to actually jump in. Last year, for example, Philadelphia native Omar Woodard raised $5,000 from almost 100 potential supporters as he considered taking a run for a state senate seat in North Philadelphia. (He ended up deciding not to run, at which point all the money was returned.)

The company estimates that 250 people from across the country have actively raised funds using the tool. About 1,000 have used it in a fashion akin to Woodard, putting their names in play, raising some funds, and then deciding to opt out. (Friends can also start a Crowdpac page for someone they believe should run, to show them that they have support.) It’s utility to a little-known candidate without established backing is obvious.

For a known quantity, such as a major party’s presidential nominee, Crowdpac’s appeal is probably much more limited. But the company’s head of product, Jesse Thomas, explains its niceties using the broad brush narrative of the presidential election—pointing out that you could use it to promise money to, say, Donald Trump that he could only collect if he made Elizabeth Warren his vice-presidential pick.

“We are trying to prove the concept by using a macro narrative, but in reality we really want to bring it home at the local level,” says Thomas. “It’s a way to make people more involved and aware of local races. There are much stronger incentives [for the tool’s use] at the local level.”

Other companies also have their eyes to the future and to down ballot races. Philadelphia’s Azavea, for example, promoted its efforts to give citizens’ insight into redistricting and gerrymandering (which will be of central importance at the beginning of the next decade). Old-timer e.thePeople and newcomer Ballot Ready, both of which have received support from Knight Foundation, promised to familiarize voters with candidates and their positions by connecting them with information on all of the candidates in their locality, their voting records, and stated positions on different key local issues. Voters can then email or text themselves their own voter cheat sheets). Such a tool wouldn’t be necessary for choosing between Hillary Clinton and Donald Trump, but for a solicitor general race it could make all the difference.

American Experiments was capped by the Microsoft Challenge, where six of the organizations competed to convince a panel of judges that their tools would be best suited to improving American democracy by 2024. The presenter from Open Primaries spoke to the crowd dressed as George Washington, condemning closed primaries that only allow those registered with a particular party to vote. “Our political process is going down the tubes,” said the bewigged John Opdycke, President of Open Primaries. “But it's great to be back in Philly."

The contest ended in a tie between CrowdPac and Democracy Works, an organization supported by Knight Foundation that bridges the information gap for voters bewildered by all the technical aspects of voting. (Many are turned off by how hard it is to register, for example.) Both winners will be featured in Governing, a magazine for state and local government leaders, but don’t receive any monetary prizes.

“It’s a brutally hot day but an inspiring day because there’s so much good will,” enthused David Thornburgh, president and CEO of the Committee of Seventy. “You may be wondering what do these guys get, well we’d love to have a huge oversized check. But in fact what you get here is eternal glory.”