A healthy democracy cannot discriminate against independent candidates and voters

The eyes of the political world were locked in when the candidates for governor of Virginia stepped on the stage for a debate on Sept. 28. With the race between Republican Glenn Youngkin and Democrat Terry McAuliffe tightening, the table was set for a dramatic, head-to-head affair. However, by debate's end, the showstopper unexpectedly was another candidate for governor: Princess Blanding.

Founder & COO of Veterans for Political Innovation. Eric graduated with Honors from the United States Naval Academy in 1997. After college, he served on Active Duty for eight years as a Naval Flight Officer, Mission Commander, and Navy ROTC Recruiter and Instructor. Eric and his family moved to St. Louis in 2005, where he graduated cum laude from Washington University School of Law in 2009. After some time practicing law, and over seven years as a full-time real estate broker-agent, he’s pursuing his calling and deep passion - systematic political reforms--a champion for any political innovation that fosters a more competitive, better functioning democratic Republic.

Co-Founder and CEO of Veterans for Political Innovation, author of Third Shift Entrepreneur. He founded Bunker Labs (www.BunkerLabs.org) to help military veterans and their spouses start and grow their own businesses, and facilitate professional growth experiences through The Collective Academy.

VFI Board member. He is a Nigerian-American politician and United States Army veteran who was the Democratic candidate for Missouri Secretary of State in the 2020 election. He graduated with a Bachelor of Science from the United States Military Academy at West Point and with a Juris Doctor from the Washington University School of Law.

He has previously worked as the executive director of the nonprofit Forward Through Ferguson, the senior vice president of United Way of Greater St. Louis, a state prosecutor at the St. Louis Circuit Attorney's Office, and a litigation attorney at international law firm Bryan Cave.

REGISTER FOR THE CALL

ICYMI: Maine’s legislature passed a historic open primaries bill--which will unlock the primaries to ALL Maine voters. The success of the Maine campaign was the product of a multi-year collaborative process between Open Primaries, Open Primaries Maine, elected officials, civic groups, party leaders, editorial boards, journalists, and citizens throughout the state to champion the right of all Maine voters to participate in primaries.

Andrew Yang and Evan McMullin have left the Democratic and Republican parties, respectively, to run as third party candidates, and more than 40% of Americans are not registered to either of the two major parties. CNN's John Avlon looks at third parties in this Reality Check.

written by Jesse Paul for The Coloradan Sun

Colorado Republicans on Sept. 18 rejected a contentious push to opt out of next year’s primaries, which would have blocked the state’s 1.7 million unaffiliated voters from helping to select the GOP’s 2022 general election candidates.

There aren’t many industries out there in which your job performance has little to no impact on whether you keep your job.

As an owner of a manufacturing plant in Baltimore City, I can say with certainty that if any of my employees ever refused to do their jobs or antagonized their colleagues while refusing to work together, they’d be fired.
Read more 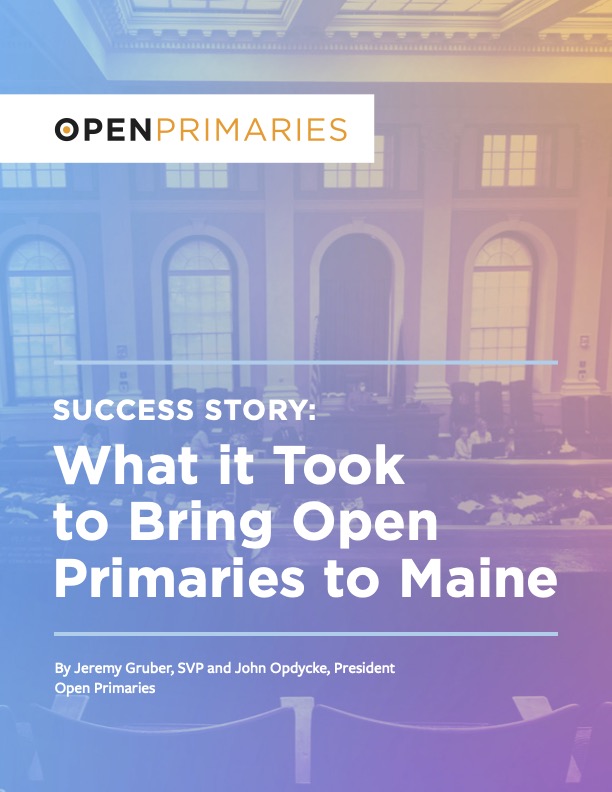 Open Primaries and Open Primaries Maine launched an effort in 2017 to enact semi-open primaries legislation. It passed after a multi-year campaign in June 2021. This report will shed light on this multi-year process and offer political reform advocates ideas and practical lessons learned that can be useful in other venues:

Trust: Open Primaries staff spent several years on the ground in the state, building a presence and developing relationships. Similarly, Open Primaries Maine was constructed exclusively with local leaders who had deep roots in Maine and were known to/had relations with the legislature and political class.

Bill Sponsors: Initial bill lead sponsor and supporters were recruited from Maine’s unusual class of independent legislators. It was insufficient. A new lead sponsor, Chloe Maxmin, emerged from within the majority Democratic Party. She joined with a co- sponsor with similar standing in the minority Republican caucus. That bipartisan formula was critical, as it provided a bulwark against the claim the bill was being used to advantage one party over the other. The youth of both lead sponsors was also a key asset as both were seen as emerging leaders in their respective parties that needed their respective caucasus’ support. It also meant they were able to offer a significant amount of energy, connectivity and willingness to prioritize and work their caucuses for support.

Relation to other reforms: Reform was not new to Maine. Maine has recently adopted several new election reforms, from ranked choice voting to automatic voter registration. These reforms, which were developed by local campaigns, have helped create a legitimacy and receptiveness to new reform conversations both within and outside the legislature.

Collaboration inside the legislature: The development of open primaries legislation was not restricted to the lead sponsor and leadership of her caucus. It was developed with input from members of both the Republican and Democratic Party caucuses through a deliberative process that included multiple amendments. That process, which took opponent’s objections seriously, created a broad class of stakeholders and helped convert numerous opponents into supporters.

Collaboration outside the legislature: The Open Primaries and Maine Open Primaries teams were very complimentary-the national team brought a high level of understanding of the issues and experience of building coalitions/campaigns and stakeholders on it and the local team brought an understanding of the state’s legislative/political climate as well as extensive local relationships. The key to success, however, was not staying in our lanes. Both teams interacted on a regular basis to question each other and develop a grounded strategic plan.

Local validators: Every supporter of the bill, from within the legislature and from the public at large, was put to work. Every member of the legislature was asked to write an op-ed or letter in support and to recruit other members of their caucus. Every member of the public was asked to write articles and letters, join organized public forums to discuss the bill and post on social media. Much of that outreach was organized in a targeted way by the campaign-i.e. letters from the public to papers in districts where supporting members needed to be recruited, outreach to relevant committee chairs by members etc. Supporting organizations weren’t just recruited; the campaign worked to develop their organizational positions on the issue and their prioritization of the issues. Prime example is the ongoing development of the LWV from a position of “neither for nor against” open primaries to one of support, and then further to making open primaries their lead priority and committing substantial resources to it.

Long game: The successful campaign to enact open primaries in Maine took several years to complete. That was anticipated. We had to build a fertile climate within and outside the legislature to allow a bill for open primaries to succeed. Accepting the timeline required for enacting lasting reform allowed us to engage in a series of activities that gave Mainers ownership of the reform in a way that will guard against future attempts to alter or repeal it.

(Governor Hochul) must push for term limits to reduce the odds of another executive believing that they are untouchable.”
— Larry Sharpe
Read more

In an historic bipartisan vote, the Maine legislature passed a semi-open primary bill--LD 231--allowing independent voters---32% of all Maine voters-the right to pick a party ballot and vote in primary elections for the first time!

In a year where many states considered rolling back voter rights and Congressional reform efforts fell victim to the partisan playbook, Maine offered a stark contrast. Sizable numbers of Republicans joined with a majority of Democrats to pass the bill 27-7 in the Senate and 92-52 in the House.  The legislation was championed by Senators Chloe Maxin (D) and Matthew Pouliot (R). 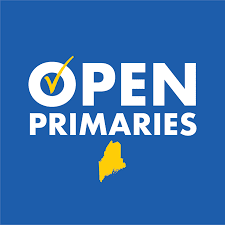 Open Primaries and Open Primaries Maine began work on this issue in 2019.  A similar bill was introduced into the 2019 session but failed to pass.  After three years of sustained advocacy and public pressure, the bill passed by wide margins in both chambers.

Several factors contributed to the passage.  There was significant turnover in the Maine legislature between 2019 and 2021, and the freshman class voted overwhelmingly in favor of letting independents vote in primaries.  There has been growing discussion about the growth in the number of independent voters in Maine, especially among veterans and millennial voters, and how their exclusion from round one of the electoral process was contrary to Maine’s culture of civic participation, innovation, and inclusion.  Senator Maxmin’s leadership was outstanding.  And the Open Primaries local and national teams put in sustained effort to broaden the coalition and secure organizational, leadership, and editorial endorsements.

In celebrating the vote, Open Primaries President John Opdycke declared: “For many years, the attitude about independent voters has been that they should join a party if they want to participate.  That’s changing, in Maine and around the country.  Elected officials are starting to appreciate that independents want to participate but they don’t like the idea that you have to join a team in order to have a voice.   Letting all voters vote may sound simple, but it’s a profound component of what it will take to improve our politics.”

The bill will be sent to the Governor for her signature.  It will take effect in 2024.

Maine Voices: Use New Glue to Repair our Democracy

Read the op-ed- A Case for Open Primaries

Happy Independence Day weekend! Here’s a roundup of the Open Primaries activities and achievements that highlight the spirit of independence in the primary reform movement right now:

Big news! Just this afternoon, the Maine Veterans and Legal Affairs Committee (a joint House/Senate committee) debated LD 231, the semi-open primaries bill.  They voted the bill positively out of committee with an "ought to pass" recommendation.

written by  BROOKE NEWMAN for KTAR.com

WASHINGTON – The major political parties in Arizona have continued to lose voters since the November election, with strident partisanship “turning off” voters and driving them to register as independents, analysts said.

written by Jared Garson for The Oregon Way

PORTLAND, Ore — The US could have chosen any other system to run elections, but somehow ended up selecting an option with numerous drawbacks: Plurality Voting. The current ‘pick one candidate’ system encourages voters to strategically choose a candidate that isn’t their first choice but is more likely to beat their least favorite choice. Plurality Voting is also vulnerable to the Spoiler Effect, which can swing an election with the entry of a popular third party candidate (see Nader in 2000).

written by Len Lazarick for the Maryland Reporter

This is an expanded version of a column that appears in the August issue of The Business Monthly newspaper, serving Howard and Anne Arundel counties.

The headlines are full of worries about mounting voter suppression in many states, such as Texas, Georgia, and Wisconsin. But Maryland has long had its own form of voter suppression that goes largely unnoticed.

written by Katherine Hamilton for RepresentUS

How did only 10% of eligible Americans effectively elect 83% of Congress in 2020?