In the 2016 race for US President, polling firms and political organizations are all clamoring for the scoop. Millions are spent trying to figure out who Republican and Democrat voters are going to support at the ballot box. But these attempts are all missing the same thing—independent voters.

Why? One reason is because they can be hard to identify. That’s particularly true in South Carolina, which uses nonpartisan voter registration. This means voters don’t pick a party when they register to vote. Partisans can be easily identified based on voting patterns, but how can you identify someone who transcends the party system and doesn’t fit into either the Democrat or Republican boxes? This has led to a large bloc of voters in South Carolina being ignored.

This is a particularly critical misstep in South Carolina.  These “undeclared” voters — as many as 25% of primary voters — will be a key deciding factor in the outcome of the South Carolina primary for both Republicans and Democrats.

This month Open Primaries took on the work of identifying independent voters in South Carolina from February 4-February 16 2016. We didn’t want to conduct a standard public opinion poll, but rather to engage them in a dialogue about the state of American politics and their views on the Presidential race. This qualitative approach allowed us to reach over 1,000 voters from a random sample list of 5,000 unaffiliated voters and speak in-depth to 250 self-identified independent voters across South Carolina. We spoke with independents from all walks of life-small business owners, professionals, millennials and retirees. 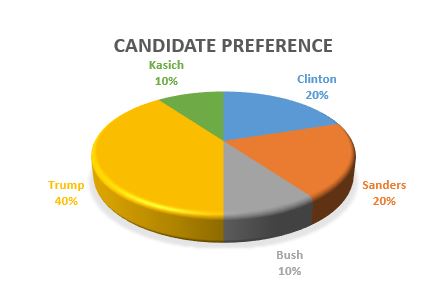 Note that additional candidates including Cruz, Rubio, and Carson are not included in the graph as their support registered at close to 0%.

How would you describe the state of American politics?

Many voters expressed a sense of helplessness—a sense that politicians made decisions without concern for ordinary Americans and there is little that could be done to change it. They were almost unanimously outraged with the level of partisanship on display in America today and connected it directly with the lack of progress on fundamental policy issues. It was common to hear words like “sad” and “shady” in response to this question.

South Carolina’s independent voters were critical of the Republican Party’s lack of connection to the voters and extremism on issues and the Democratic Party’s reliance on entitlements and weakness in presenting a compelling message.

Independent voters generally supported the limited open primary system in place but preferred a system that would allow them more choice to vote across party for Federal and state elections.

“We're corrupt. We lost our values, our morals, as a nation.”

“You have to weigh out your checks and balances, but even the current way now, there is some good and some negative.”

“It sucks. I just wish they would go back and quit lying. [Politicians] need to learn to compromise-- how about that? It's the big money groups, the big corporations, that’s the problem.”

What qualities about a candidate makes them win your support?

Independents had varying responses about qualities they look for in a candidate. Some look for an emotional appeal, while others judge a candidate by their discipline and behavior. The most common response was a desire to know the candidate will live up to their word.

“All I look is for a man to live up to his words. That's what makes a man a man. You must live up to what you are saying.”

“The person's discipline, their behavior, and a person who is educated. They must feel secure with their language—a voice that can get everything across calmly. I won’t vote for someone who just talks, but has nothing to say.”

South Carolinians have a history of swaying presidential races. They’re an early primary state that helped change the course of the election for Bush in 2000 and Obama in 2008. The independent voters we spoke to understand that power. From these calls, we were able to pick up on a sense of pride about their chosen candidates. Note the incongruence in the two charts above on the candidates’ relationship to independent voters.  However, in 2016, candidates are missing the mark on failing to reach out to Independent voters. 75% of Independents haven’t been contacted this election cycle. This only serves to further the disconnect between candidates and independent voters.