Happy Independence Day weekend! Here’s a roundup of the Open Primaries activities and achievements that highlight the spirit of independence in the primary reform movement right now:

Latinos are the fastest growing voter demographic in the US.  They were a decisive presence in elections across the country in 2020. Both major parties have made a priority of organizing them, but with decidedly very mixed results. Now a new report: Real Talk: Understanding Texas Latino Voters Through Meaningful Conversation conducted by Culture Concepts for the Texas Organizing Project Education Fund is starting to explain why: partisan labels and categories just don’t cut the mustard when it comes to understanding, engaging and empowering Latinos.

On Thursday July 15th at 12pm EST we’ll host our final Zoom of the summer and hear directly from the report’s authors, Cecilia Ballí and Michael Powell as well as OP Spokesperson, Attorney & Former Board Chair of La Raza, Danny Ortega and get their insights into this fascinating new report--Register today!

In an historic bipartisan vote, the Maine legislature passed a semi-open primary bill, allowing 400,000 independent voters- 32% of all Maine voters-the right to pick a party ballot and vote in primary elections for the first time--WATCH VIDEO.  In a year in which many states are considering the rollback of voter rights and Congressional reform efforts are falling victim to the partisan playbook, Maine offers a stark contrast. Sizable numbers of Republicans joined with a majority of Democrats to pass the bill 27-7 in the Senate and 92-52 in the House. The legislation was championed by Senators Chloe Maxin (D) and Matthew Pouliot (R).

Open Primaries and Open Primaries Maine began work on this issue in 2017.  A similar bill was introduced into the 2019 session but failed to pass.  After several years of sustained advocacy and public pressure, the bill passed by wide margins in both chambers.

“For many years, the attitude about independent voters has been that they should join a party if they want to participate.  That’s changing, in Maine and around the country.  Elected officials are starting to appreciate that independents want to participate but they don’t like the idea that you have to join a team in order to have a voice. Letting all voters vote may sound simple, but it’s a profound component of what it will take to improve our politics.”

The bill will be sent to the Governor for her signature. It will take effect in 2024.

INDEPENDENTS IN THE MAINSTREAM MEDIA

Independent voters and politics are no longer a part of conversations happening on the fringes of American politics--they’re right in the middle of the discussion on how we can reform our system to make it more inclusive and representative.

In the last 6 weeks, The Washington Post, US News & World Report, The Arizona Republic, The Nevada Current, The Statesman Journal , Pittsburgh Post-Gazette and The Fulcrum have all released important pieces covering the rise of independent voters and how understanding and enfranchising these voters can help move our democracy in a better and healthier direction.

We encourage you to read and share these pieces with your network--let us know which one you think best speaks to what’s happening in the country right now!

ICYMI: The Open Primaries Education Fund (501C3) released a fascinating and important report recently on the rise of independent voters in America. After analyzing the data in the 30 states with partisan voter registration data, OP President John Opdycke and SVP Jeremy Gruber found that party membership is declining in almost every state and independent voters currently hold the place of largest or 2nd largest group of registered voters in half the states in the country. With current rates of growth, that will soon include every state.

Political scientists, analysts and pundits have dismissed this trend for years, while ignoring the myriad ways registered independent voters are treated as second class citizens and submitted to legal, political and administrative bias. Our report demonstrates with hard data that the rise of independent voters is significant and it’s time these voters be treated with full and equal voting rights. 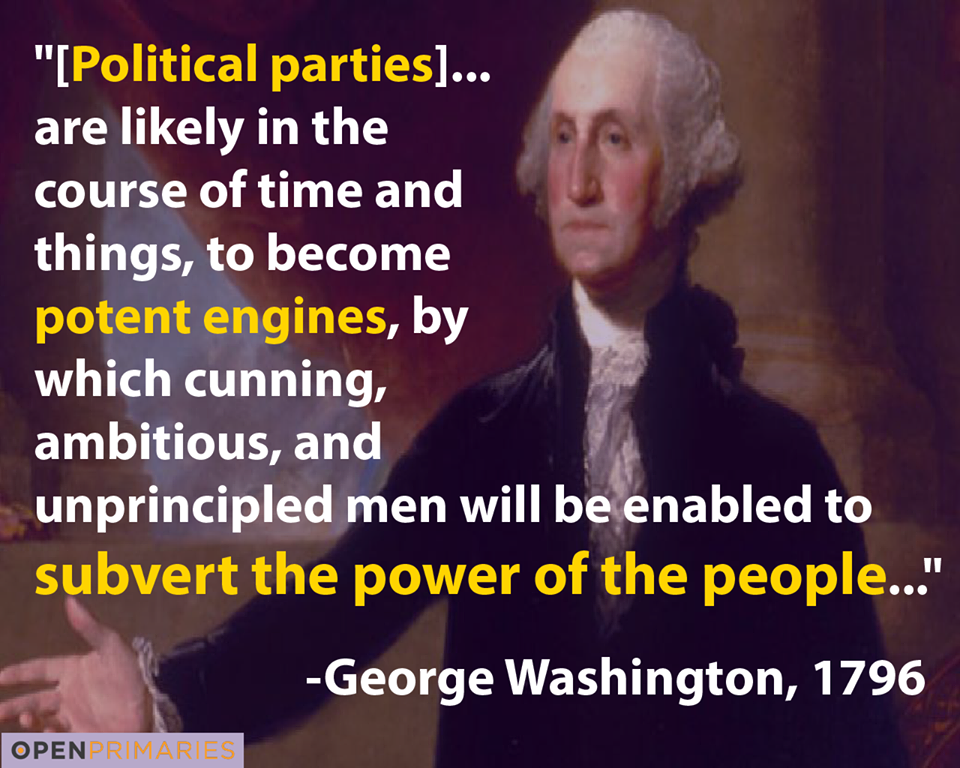 A MESSAGE FROM GEORGE WASHINGTON, OUR FIRST PRESIDENT...AND AN INDEPENDENT!

225 years later, the power of the parties is even more entrenched. With more and more voters breaking free of partisan politics and leaving the two major parties--It’s time we returned power to the people by opening our elections to all voters.

Have a safe and happy Independence day!