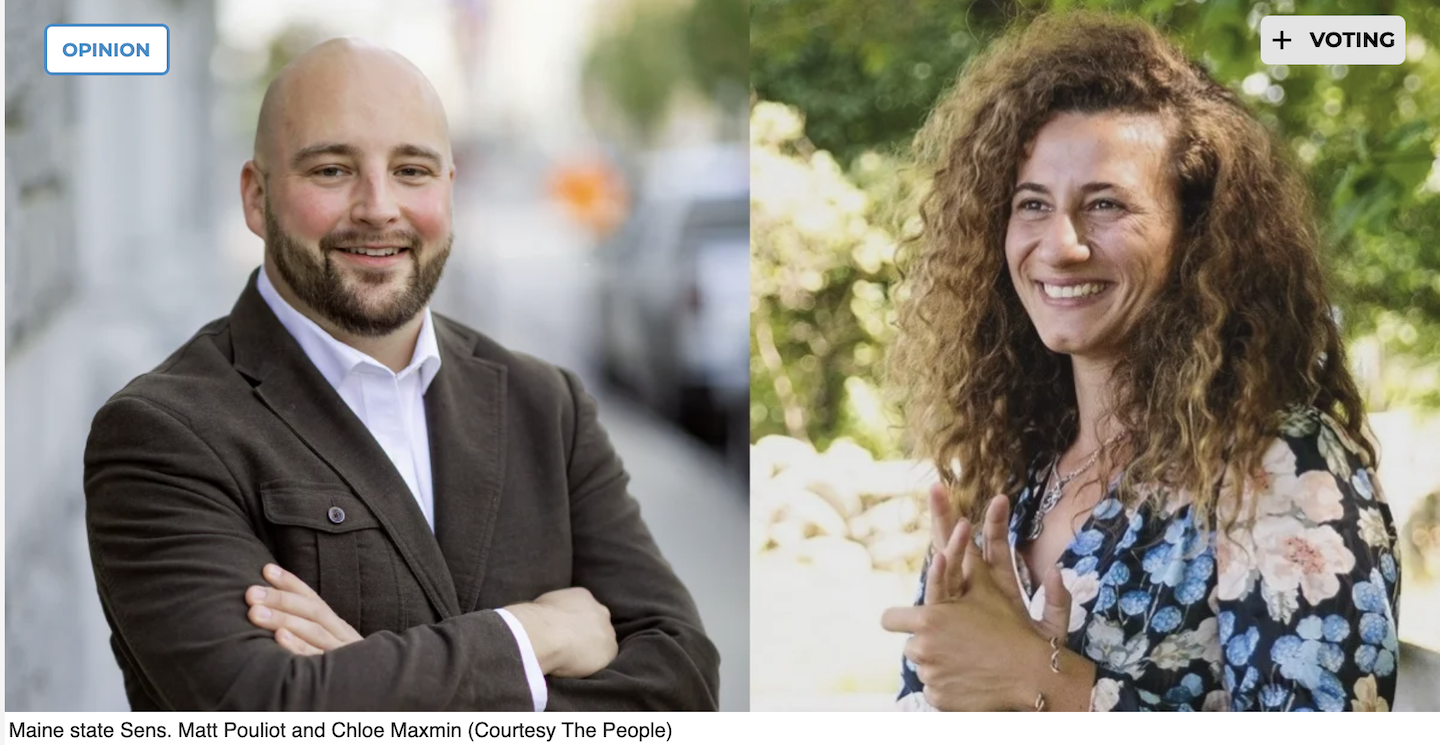 written by Katie Fahey for The Fulcrum

Since organizing the Voters Not Politicians 2018 ballot initiative that put citizens in charge of drawing Michigan's legislative maps, Fahey has been the founding executive director of The People, which is forming statewide networks to promote government accountability. She regularly interviews colleagues in the world of democracy reform for our Opinion section.

Two Maine state senators, Democrat Chloe Maxmin of Nobeloboro and Republican Matt Pouliot of Augusta, are sponsoring legislation that would allow voters not registered with a political party to cast ballots in partisan primaries. After a term in the state House, last year Maxmin was elected at 28 as the youngest woman ever to serve in the state Senate. Pouliot, in his second term, is the assistant minority leader.

Our recent conversation has been edited for clarity and brevity.

Fahey: How would your bill change Maine elections?

Maxmin: It's a semi-open primaries bill, so it would allow any unenrolled voter to vote in a primary election. It wouldn't allow a Democrat to vote in the Republican primary, or vice versa. It's meant to increase access to the party primary system.

Fahey: Why are you supporting this?

Pouliot: My party has the smallest membership in Maine; there are more Democrats and unenrolled voters than Republicans. It's important for more folks to be able to participate because the current process causes each party to nominate candidates usually further toward one end of the spectrum or the other. Semi-open primaries would help pull us toward the middle. By having unenrolled voters participate, we may have a better chance of getting candidates that are more aligned with the majority of folks' views, as opposed to polarized figures. It is extremely important that we find ways to get more civility in politics.

Maxmin: I promised every independent I talked to on my campaign trail that I would support this bill; it came up all the time. A third of my constituents don't have a say in who they're going to end up voting for in the general election, and it generates feelings of distrust and being left out of the process. Semi-open primaries are one answer to that frustration, though certainly not a complete answer.

Fahey: What about Maine's political landscape makes this switch important?

Maxmin: We form our relationships around our common values. When I first got access to the voter database, I looked up everyone who raised me and realized they were all Republicans, but that never mattered. What matters is that you're a good person, a good neighbor. This bill would ensure our voting infrastructure matches the values of our communities.

Fahey: What is the history of this debate?

Maxmin: Last year the bill didn't pass because almost all Democrats voted against it. This made me quite upset because, at the time, the district I now represent was only 27 percent Democratic and had more independents than any party. But that version didn't include language, which we've added, to address concerns around preservation of delegate count and ballot tracking — important for folks more invested in the party structure. Now my impression is we'll get bipartisan support this time, and we're working to make sure of that.

Fahey: Is there anything Mainers can do to move the bill toward a hearing and a vote?

Maxmin: They can go to our site for help with emailing committee members, submitting written testimony or signing up to testify live. We also have a large group organizing with us that can help voters write letters to the editor and engage in the community.

Pouliot: One of the best ways for people to influence policy is to call their own state legislators. We get a lot of non-constituent emails which help raise an issue on our radar, but aren't always very compelling. People can even text or message their legislator on Facebook to convey how they feel.

Fahey: Is anyone opposing the bill?

Pouliot: Some folks in my party say it would dilute the Republican Party, take away the impetus for people to join a party and therefore make the parties weaker. If you removed the fear of the unknown about how semi-open primaries would impact parties, most would say this is a no-brainer.

Maxmin: As far as I can tell, there's no concerted group lobbying against it, but in conversations with folks there have been a couple objections. One is it could be used to unfairly swing a primary, but there are already stories of that with the current system. The other is that being part of a party is a privilege, and to vote in a primary, you need a D or an R next to your name. Nothing in democracy should be so exclusive that no one else has the right to access it unless they give something up.

Fahey: What has it been like working across the aisle?

Pouliot: I had some preconceived notions about Sen. Maxmin before we really got to know each other. Now I see she has good, sound reasoning behind her ideas, even if we sometimes disagree. We don't always have great opportunities for dialogue with other members of the legislature, and I think a lot of challenges in this country can be overcome with better dialogue.

Fahey: If you were speaking to a high school student or a new immigrant to this country, how would you describe what being an American means to you?

Maxmin: The reason I love American democracy is that we're fighting for a collective form of freedom. All of our interests are tied together, and all our fights for our rights are won when we lift each other up. We're in a moment where democracy is being used to pit people against each other. We're fighting over what makes us different. But to me, that's not what it means to be an American, and it's not why I choose to serve. Elections and democracy should be about including everyone and giving everyone equal opportunity, which ties to my support for semi-open primaries.

Pouliot: A lot of what she said is spot on. We are fortunate to live in a country where we can express our views at the ballot box. Our system, where citizens collectively decide who represents us, is incredible. Our Founders had a lot of foresight developing a system that is really just a work in progress. Our country, now 245 years old, is still very much an experiment. It's exciting to be part of that experiment.