Want to fix American politics? Open up the primaries 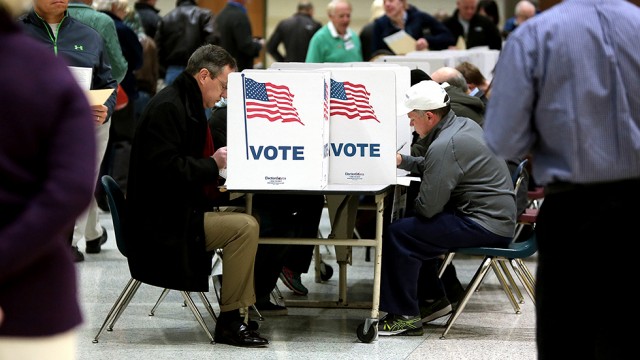 Americans are now treated to a 24/7 freak show of government dysfunction, charges and countercharges, midnight tweets and myriad other forms of dystopian political theatre.

The professional pundits and their assembled panelists profess their disgust at the toxicity — and then gleefully throw another log on the fire.

Is there any way for the American people to intervene?

Across the country, in inner cities, suburbs, and in rural areas, Americans of diverse viewpoints and allegiances express near unanimous dissatisfaction with Washington’s culture of division, partisanship, exaggeration, and subpar performance.

We’ve become desensitized to the parade of polls that show again and again that the American people are deeply unhappy with Congress, distrust both political parties, and want a politics that serves the people not special interests.

It only gets worse.

The Democratic Party claims to have a solution. First, they reduce the problem with Washington to a single word: Trump.

And then they offer an appropriate solution — “resist.”

Their goal is to channel disgust into votes so that they can gain a majority in Congress and defeat (either at the ballot box or via impeachment) President Donald Trump.

But is more partisanship an adequate response to run-amok partisanship? Many Americans think that is a dubious proposition.

A recent Washington Post/ABC poll revealed that a majority of Americans believe that President Trump (58 percent) and the Republican Party (63 percent) are “out of touch with the concerns of most people in the United States today.”

But the same poll revealed that 67 percent of the same respondents also see the official opposition, the Democratic Party, as out of touch. Americans have traditionally sought to affect change by casting midterm votes for the opposition party.

If the Washington Post/ABC poll is correct, a majority of Americans are beginning to question whether “swinging” will be enough to move our country in the right direction.

During the 2016 presidential primaries, closed, members-only primaries in influential states like Arizona, New York, Florida and Pennsylvania shocked many Americans and amplified concerns that the system is rigged.

Since then, the call from everyday Americans for reform has only increased. I speak to these folks every day. They come from all walks of life, but they are united in the belief we need to reclaim our politics for the people.

Sharon, a 73 year old retiree from Bonneville, Idaho that I recently spoke with signed a petition directed at the Governor and Legislature to restore Idaho’s open primary which had been closed after a successful GOP initiated lawsuit.

Sharon told me “I’ve been voting for 50 years and I’ve never seen Congress like this. I’m a Democrat who has voted both ways and always felt that everyone I know votes for how they think will be best for the country. But that’s not what our politicians do. It’s 100 percent about them, their agenda, and their party. The government is supposed to be for everyone. I’m here in Idaho and it seems like there are no places to talk about these things. I’m hoping that regular people can participate and do something about this mess.”

Frank, an engineer who recently moved from Alabama to Panama City, Florida recently testified in favor of open primaries at a local hearing held by the Florida Constitutional Revision Commission.

He shared with me why he took two hours of his time to speak out.

“Voting is important but a whole group of us have been disenfranchised. I’m conservative and I vote Republican but I won’t affiliate with either party because I don’t like the institutionalization. We have some of these guys who have been in Washington for 50 years! I’m proud to be an American but we no longer have the ways and means to help us bond and mix the country up. The draft used to apply to everyone and farm boys and inner city kids would get to know each other. Now everyone is in their own bubble and the media just preys on us and our biases. I spoke up for open primaries because maybe it can help mix us up again. It’s worth a shot because we have a great country.”

The American people need new tools to affect change in Washington. To create those tools, we need—as Frank says—to mix it up in some new ways. Partisanship forces people apart and into silos.

Open primaries bring people together and enforces accountability. They create new opportunities to work together, form innovative coalitions and debate issues on the merits. That’s why open primaries are so relevant right now and why activists in Florida, Idaho and many more states are working hard to impact on local laws and on the rules for our next presidential primary in 2020.

As long as our system of elections incentivizes politicians to play to their partisan base, Washington won’t change. It will continue to get worse.

Americans are demanding our political system evolve to address this reality. It’s time for all of us-Democrats, Republicans, and independents-to build a better system. It’s time to mix it up.